Three months of stationary-bike endurance exercise training decreased abdominal visceral fat in obese patients, but not when they were also receiving tocilizumab (RoActemra, Roche), an antibody that blocks interleukin-6 (IL-6) receptors, in a new exploratory trial.

“To our knowledge, this is the first study to show that IL-6 has a physiological role in regulating visceral fat mass in humans,” said lead author Anne-Sophie Wedell-Neergaard, MD, PhD student, University of Copenhagen, Denmark, in a statement from her institution, released to coincide with publication of the study in Cell on December 27.

“We all know that exercise promotes better health,” she continued, “and now we also know that regular exercise training reduces abdominal fat mass and thereby potentially also the risk of developing cardiometabolic diseases.”

According to Wedell-Neergaard, physicians should tell patients “when you start exercising, you may increase body weight due to increased muscle mass. So, in addition to measuring your overall body weight, it would be useful, and maybe more important, to measure waist circumference to keep track of the loss of visceral fat mass and to stay motivated.”

This study also “raises a potentially important side effect of IL-6 receptor antibodies, such as tocilizumab” (that is, they block the belly-shrinking effect of exercise in obese patients), the researchers note.

Tocilizumab also increased total cholesterol and LDL-cholesterol compared with placebo both in participants in the “exercise” or “no-exercise” groups.

However, it remains to be seen whether these effects are also true for non-obese patients. 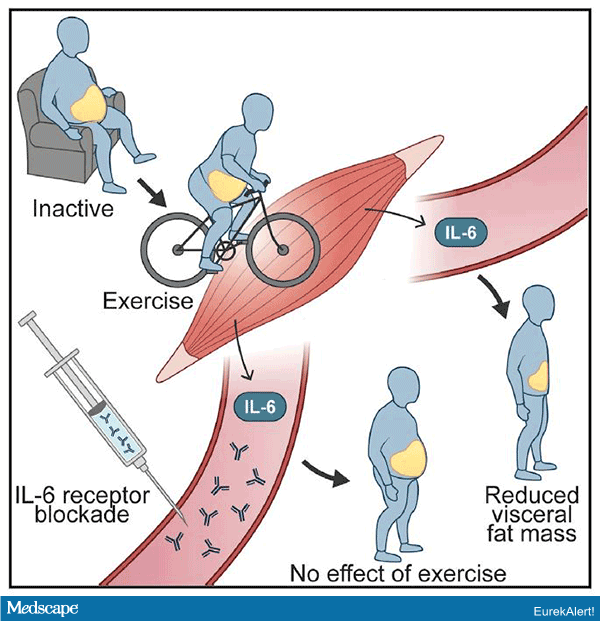 On the other hand, exercise stimulates lipolysis, which is often attributed to the effect of epinephrine.

The researchers hypothesized that IL-6, which is released by skeletal muscles during exercise, may play a role in exercise-induced reductions in abdominal visceral tissue mass.

To test this, they randomized 67 physically inactive adults at their center who had a waist circumference of ≥ 88 cm for women or ≥ 102 cm for men to one of four groups:

Tocilizumab (8 mg/kg body weight diluted in saline) and saline placebo were given as three monthly injections infused over 1 hour.

Patients were a mean age of 44 years and had a mean body mass index of 33 kg/m2. Three quarters (40/53) of participants were women.

Researchers measured visceral fat mass using MRI at the beginning and end of the study.

The 8% reduction in visceral adipose tissue with exercise was lower than the 15% to 20% reductions reported in other studies, likely because of longer exercise sessions in the other studies, the researchers suggest.

However, IL-6 blockade did not affect improvements in cardiorespiratory fitness, which were the same in both exercise groups.

This is an exploratory study, the authors caution, with a small number of participants. Nevertheless, the findings were consistent for both sexes.

In addition, chronic low-grade elevations of IL-6 are seen in patients with severe obesity, type 2 diabetes, and cardiovascular disease, the researchers note, so it is “likely that IL-6 may act differently in healthy and diseased people.”

Nevertheless, “this study has consolidated a physiological role of IL-6 as a lipolytic factor in humans with abdominal obesity and highlights a potentially important metabolic consequence of IL-6 blockade.”

“It remains to be clarified,” they conclude, “whether IL-6 regulates visceral adipose tissue mass in humans with all waist circumferences.”

Rheumatoid arthritis (RA) patients treated with tofacitinib (Xeljanz) and tocilizumab (Actemra) have notable changes in serum lipids compared with placebo-treated patients, according to a Spanish meta-analysis.

Among patients treated with tofacitinib, either 5 mg or 10 mg twice daily, the mean percentage of increases in HDL and LDL were also higher than in the trials’ comparator groups, according to the report in the January 2015 issue of Arthritis and Rheumatology.

“Whether these changes pertain to the control of inflammation or to the mechanism of action of biologic agents or tofacitinib remains undetermined,” wrote researchers led by Alejandro Souto, MD, of the University Hospital Complex at the University of Santiago de Compostela in Spain.

While the biggest cause of death in RA and SpA is cardiovascular (CV) disease, the augmented risk of CV events and death related to accelerated atherosclerosis is not explained by traditional CV risk factors alone. Recently, systemic inflammation, as reflected by high levels of C-reactive protein and an elevated erythrocyte sedimentation rate, has been identified as a new independent risk factor.

The net effect on CV risk of improving the inflammatory burden with Janus kinase inhibitors (i.e., tofacitinib) and interleukin-6 antagonists (tocilizumab) but increasing cholesterol level is an emerging concern, the authors noted. In contrast, TNF antagonists and methotrexate appear to have positive effects on the rate of CV events.

Identifying 4,527 studies, the researchers reviewed 20 eligible articles and five documents on randomized, controlled trials (RCTs) in RA. Eligible studies included 12 RCTs of TNF antagonists (infliximab, adalimumab, golimumab), seven RCTs of tofacitinib, and six RCTS of tocilizumab. The investigators’ initial objective was to assess changes in the percentage of treated RA and SpA patients with abnormal lipid values or changes in the mean percentage of increase in cholesterol and triglyceride levels.

A comparison across different inflammatory diseases by treatment with different biologic agents may provide important information on the link between inflammatory burden, lipid profiles, and CV events, the investigators said.

And while only tofacitinib and tocilizumab produced significant changes in the lipid profiles of RA patients, the long-term consequences of CV disease in this population need to be assessed. “Meanwhile, adequate and earlier control of disease activity and systemic inflammation may perhaps improve the risk of cardiovascular disease,” they concluded.

We did this randomised, double-blind, parallel-group, phase 4 superiority study in 76 centres in 15 countries in North and South America, Australasia, and Europe. We enrolled patients who were aged at least 18 years, had severe rheumatoid arthritis for 6 months or more, and were intolerant to methotrexate or were inappropriate for continued methotrexate treatment. Patients were randomly assigned (1:1; block size of four) to receive tocilizumab 8 mg per kg bodyweight intravenously every 4 weeks plus placebo subcutaneously every 2 weeks or adalimumab 40 mg subcutaneously every 2 weeks plus placebo intravenously every 4 weeks for 24 weeks. Investigators, patients, and sponsor personnel were masked to assignment. The primary endpoint was change in disease activity score using 28 joints (DAS28) from baseline to week 24. This trial is registered with ClinicalTrials.gov, number NCT01119859.

Tocilizumab monotherapy was superior to adalimumab monotherapy for reduction of signs and symptoms of rheumatoid arthritis in patients for whom methotrexate was deemed inappropriate. The adverse event profiles of tocilizumab and adalimumab were consistent with previous findings.

Objective: To evaluate through the AMBITION study the efficacy and safety of tocilizumab monotherapy versus methotrexate in patients with active RA for whom previous treatment with methotrexate/biological agents had not failed.

Methods: This 24-week, double-blind, double-dummy, parallel-group study, randomised 673 patients to either tocilizumab 8 mg/kg every 4 weeks, or methotrexate, starting at 7.5 mg/week and titrated to 20 mg/week within 8 weeks, or placebo for 8 weeks followed by tocilizumab 8 mg/kg. The primary end point was the proportion of patients achieving American College of Rheumatology (ACR) 20 response at week 24.

Results: The intention-to-treat analysis demonstrated that tocilizumab was better than methotrexate treatment with a higher ACR20 response (69.9 vs 52.5%; p<0.001), and 28-joint Disease Activity Score (DAS28) <2.6 rate (33.6 vs 12.1%) at week 24. Mean high-sensitivity C-reactive protein was within the normal range from week 12 with tocilizumab, whereas levels remained elevated with methotrexate. The incidence of serious adverse events with tocilizumab was 3.8% versus 2.8% with methotrexate (p = 0.50), and of serious infections, 1.4% versus 0.7%, respectively. There was a higher incidence of reversible grade 3 neutropenia (3.1% vs 0.4%) and increased total cholesterol ⩾240 mg/dl (13.2% vs 0.4%), and a lower incidence of alanine aminotransferase elevations >3×–<5× upper limit of normal (1.0% vs 2.5%), respectively.

Conclusion: Tocilizumab monotherapy is better than methotrexate monotherapy, with rapid improvement in RA signs and symptoms, and a favourable benefit–risk, in patients for whom treatment with methotrexate or biological agents has not previously failed.