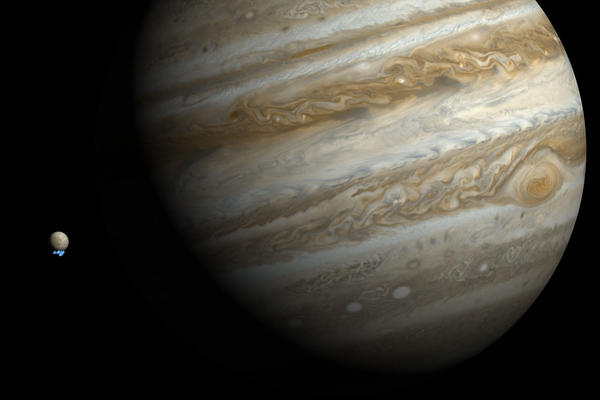 The discovery, described in the journal Science and at the American Geophysical Union meeting in San Francisco, shows that Europa is still geophysically active – and that this world in our own solar system could hold an environment friendly to life.

“It’s exciting,” said Lorenz Roth, a planetary scientist at the Southwest Research Institute in San Antonio and one of the study’s lead authors. “The results are actually more convincing than I would have thought before.”

Europa isn’t the only squirty moon in our planetary system: Saturn’s moon Enceladus has also been caught shooting water out of its south pole in so-called tiger stripes. These pretty plumes are caused by tidal forces. Just as our moon’s gravity squeezes and stretches the Earth a bit, causing the oceans to rise and fall, Saturn’s massive gravitational pull squeezes and stretches its tiny moon, causing cracks on its icy surface to open and allowing water to shoot out.

Scientists have long wondered whether something similar was happening on Jupiter’s moon Europa. After all, its surface is about 65 million years old, which is extremely young by our solar system’s standards, little more than 1.5% of the solar system’s age. This should mean that some geophysical processes must be constantly renewing the surface.

But over several decades, researchers repeatedly failed to catch the moon in action, said Robert Pappalardo, a Jet Propulsion Laboratory planetary scientist who was not involved in the study.

When the Voyager spacecraft, launched in 1977, flew by Europa, it caught a tiny blip on the moon’s edge that people thought might be a plume, but it could not be confirmed. Then the 1989 Galileo spacecraft saw a potential plume of its own. But this turned out to be digital residue, traces of a previous image, Pappalardo said.

Even Hubble probably wasn’t able to properly see such plumes until space shuttle astronauts on the very last servicing mission for the iconic space telescope in 2009 fixed one of its cameras. Even now, looking for water vapor in the ultraviolet wavelengths of light tests the limits of Hubble’s abilities, scientists said.

To catch Europa in the act, the researchers also knew they had to time their observations right. Saturn’s icy moon, Enceladus, shoots water near the farthest point in its orbit from Saturn, when the tidal forces cause cracks at the moon’s south pole to open. Around Jupiter, Europa was probably doing the same thing.

Sure enough, when the scientists looked at Europa when it was close to Jupiter in its orbit, they saw nothing. But in December 2012, when the ice moon was at its farthest point from the gas giant, they caught a pair of plumes bearing clear signs of oxygen and hydrogen – the components of water vapor – shooting from near the southern pole.

Scientists can’t say exactly where the plumes are coming from. It could be that they’re going directly from solid ice to gas, as Europa’s ice sheets rub against each other. But it could also be that the these plumes of vapor may be coming from the ocean of liquid water thought to lie under the moon’s frozen surface.

If the moon is still geophysically active, that could make it a prime environment for life.

Another study out of this week’s American Geophysical Union meeting found signs of clays on Europa’s surface. Clays are often associated with organic matter, which is why NASA’s Mars rover Curiosity is headed to Mt. Sharp, whose clay-rich layers could hold signs of life-friendly environments.

Those clays were probably brought to Europa by comets or asteroids, and if such material was able to make it into Europa’s subsurface ocean, it could provide the nutrient-rich soup that could allow life to emerge.

“We’re trying to understand, could this be a habitable environment today? Could there be life there today?” Pappalardo said. “At Europa, it seems the processes that could permit habitability may be going on now.”

Perhaps future studies can analyze all the contents of that watery plume and see if there are any signs of organic matter, Pappalardo said. Perhaps a future mission to Europa could fly through the plume and directly sample its contents.

For now, it’s important to replicate the results, he added.

“I will sleep better knowing that there are follow-up observations that confirm it,” Pappalardo said.

Van Allen belts accelerate their own particles rather than just trapping them.

The two concentric rings of high-speed particles that encircle the Earth are finally giving up the secrets of their origin — 55 years after their discovery. Two NASA probes have found evidence that the Van Allen belts, as the rings are known, are responsible for accelerating the particles, rather than collecting energetic particles that originated elsewhere. Space scientists think that their latest findings1 could also account for the even more energetic belts circling Saturn and Jupiter, as well as high-energy radiation associated with worlds beyond the Solar System and even some Sun-like stars.

For several years after 1958 — when space scientist James Van Allen and his colleagues identified the radiation belts that now bear his name, using instruments aboard the first US space mission — researchers theorized that the rings’ electrons came from distant reaches of Earth’s magnetosphere, the bubble of space dominated by the planet’s magnetic field. They proposed that as the particles drifted closer to Earth and encountered stronger magnetic fields, they would accelerate and settle into a ring-like configuration.

But this type of acceleration process would take days to weeks and best describes radiation belts that vary only gradually over time. In the 1990s, satellites began to reveal that the energy and density of the Van Allen belts changed more quickly. As a result, a competing theory for the origin of the belts’ electrons began to take hold: that charged particles do not come from afar, but are produced locally, when electric fields within the belts rip electrons off from wandering atoms and accelerate those electrons to nearly the speed of light. This process could alter the density and energy of the belts on scales of seconds to hours, a theory that matched better with the observations from the 1990s.

However, the satellite observations were still too sparse and the craft were not designed to measure rapidly changing properties of the belts at different locations — as would be needed to fully distinguish between the two proposed acceleration mechanisms, says space scientist Harlan Spence of the University of New Hampshire in Durham, a co-author of the study.

That data gap drastically narrowed with the August 2012 launch of NASA’s Van Allen Probes, two identical satellites that simultaneously study the belts from different locations and viewing angles. In early October, a week after a solar storm had depleted the outermost belt of most of its electrons, the two probes recorded a nearly 1,000-fold jump in electron density in less than 12 hours. The twin set of observations clinches the case for electric fields within the belt accelerating the electrons, Spence says.

Heart of the matter

“We have in this one event been able to really distinguish between the different ways that particles can be accelerated,” says Spence. “The radiation belts were the first discovery of the space age,” he adds, “and it’s just really exciting with the Van Allen probes to have seen right to the heart of the process.”

The measurements “clearly show that substantial particle acceleration can occur locally in the heart of the radiation belts”, comments space physicist David McComas of the Southwest Research Institute in San Antonio, Texas, who was not involved in the study.

Spence suggests that the frequency of some of the electromagnetic waves in the belt matches the frequency at which electrons travel around the local magnetic field, a synchrony that makes it easy to rev up the charged particles.

Local acceleration of energetic particles is a general physical process, notes McComas, “so if it occurs in the heart of the Earth’s Van Allen belts, it also probably does so in the more intenseradiation belts around Jupiter and Saturn and even in planets around magnetized stars beyond the Solar System.” Stars that radiate a high concentration of X-rays and have magnetic fields shaped like that of Earth’s — which is essentially a large bar magnet — may be candidates for sporting a similar acceleration process, Spence adds.