In a widely-discussed recent essay for the New Atlantis, the policy scholar Daniel Sarewitz argues that science is in deep trouble. While modern research remains wondrously productive, its results are more ambiguous, contestable and dubious than ever before. This problem isn’t caused by a lack of funding or of scientific rigour. Rather, Sarewitz argues that we need to let go of a longstanding and cherished cultural belief – that science consists of uniquely objective knowledge that can put an end to political controversies. Science can inform our thinking; but there is no escaping politics.

Sarewitz, however, fails to note the corollary to his argument: that a change in our expectations concerning the use of science for policy implies the need to make something like philosophical deliberation more central to decision making.

Philosophy relevant? We had better hope so. Because the alternative is value fundamentalism, where rather than offering reasons for our values, we resort to dogmatically asserting them. This is a prescription for political dysfunction – a result increasingly common on both sides of the Atlantic.

Of course, deliberating over values is no more a magic bullet than science has turned out to be. But whether we are talking about scientific results, or ethical, social and political values, a lack of certainty does not mean that evidence cannot be marshalled and reasons cannot be given.

Practically speaking, this implies employing individuals with philosophical training in a wide variety of policy and regulatory institutions: not as specialists whose job is to provide answers, but to ask the right kinds of questions.

As it is currently constituted, academic philosophy is not up to this task. A premium is placed on theoretical rigor, at the loss of social significance. This reflects the institutional form that philosophy has taken. Prior to the twentieth century, philosophers could be found in a variety of occupations. Since 1900, however, they have had only one home – the university, and within it, that peculiar institution known as the ‘department’. Philosophy departments ghettoize ideas, steering philosophers toward problems of interest to their disciplinary colleagues – at the cost of practical relevance to wider societal concerns. Even applied philosophers suffer from a form of disciplinary capture.

Indeed, what Sarewitz says of academic science is painfully true of most philosophy and of the humanities generally. Philosophers have mimicked scientists in all the worst ways: practicing a highly specialised discipline and speaking primarily to one another. One telling sign of this: of the approximately 110 PhD programs in philosophy in the United States, not a single one emphasises the importance of training graduate students to work outside of the academy.

This suggests the need for something analogous to the open science movement, directed towards the humanities. Open science marks a sea change in how science is done: with its call for open data, open laboratories, open peer review and open access. Promoted by bodies like the Wellcome Trust, European Commission and US National Academies, open science emphasizes the importance of transparency from the design of research projects to the reporting of results. An equivalent “open humanities” initiative could help to bring philosophy out of the study and into the community.

Sarewitz doesn’t speak in terms of open science. Rather, he revives Alvin Weinberg’s call for “trans-science”, a problem-oriented approach to inquiry that is judged by its success in the real world, rather than by disciplinary metrics. Weinberg says that trans-science begins with an act of “selfless honesty” where experts acknowledge that an issue has exceeded the boundaries of their domain.

Trans-scientists have to know when they don’t know – otherwise they’ll labor under the illusion (and perhaps fool others too) that they are capable of solving problems that they can’t. This is the stuff of Socrates. For Socrates, wisdom consisted in knowing that one doesn’t know. He exposed the self-assured expert as a poseur, pronouncing on matters outside his jurisdiction.

If trans-science is our new ideal, then Socrates is back in business. Philosophers working within the Socratic model can bring useful skills to our knotty problems, including hermeneutics (thinking through issues that allow varying interpretations and framings), ethics (uncovering and analyzing hidden value commitments), and epistemology (assessing different claims to knowledge). 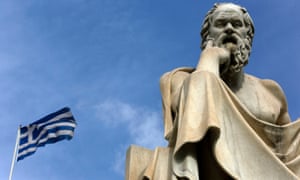 But as important as these activities are, more crucial is the propagation of a distinctive mindset: a commitment to explaining one’s values and to giving a hearing to the values of others. This will require philosophers to also let go of their cherished claims to expertise, and engage in humble collaborations with others. Above all, they need to stop talking only to one another.

Society has long hoped that science could dispense with the need for politics. Philosophy has tried to turn open questions about the good life, beauty, and justice into arguments that experts can seal shut with certainty. It turns out, however, that we all are doomed to philosophize. So let’s find ways to do it better, in public venues that are open to all.

Physicist Sean Carroll has some words of wisdom for physicists who might have less than complimentary things to say about philosophy. The most recent altercation between a physicist and philosophy came from Neil deGrasse Tyson who casuallydisparaged philosophy in a Q&A session, saying that it can be a time sink and it doesn’t actually provide any concrete answers to scientific questions. Now I am willing to give Tyson the benefit of doubt since his comment was probably a throwaway remark; plus it’s always easy for scientists to take potshots at philosophers in a friendly sort of way, much like the Yale football team would take potshots at its Harvard counterpart.

But Tyson’s response was only the latest in a series of run ins that the two disciplines have had over the past few years. For instance in 2012 philosopher David Albertcastigated physicist Lawrence Krauss for purportedly claiming in his most recent book that physics had settled or at least given plausible answers to the fundamental question of existence. In reply Krauss called Albert “moronic” which didn’t help much to bridge the divide between the two fields. Stephen Hawking also had some harsh words for philosophers, saying that he thought “philosophy is dead”, and going further back, Richard Feynman was famously disdainful of philosophy which he called “dopey”.

In his post Carroll essentially deconstructs the three major criticisms of philosophy seen among physicists: there’s the argument that philosophers don’t really gather data or do experiments, there’s the argument that practicing physicists don’t really use any philosophy in their work, and there’s the refrain that philosophers concern themselves too much with unobservables. Carroll calls the first of these arguments dopey (providing a fitting rejoinder to Feynman), the second frustratingly annoying and the third deeply depressing.

I tend to agree with his take, and I have always had trouble understanding why otherwise smart physicists like Tyson or Hawking seem to neglect both the rich history of interaction between physics and philosophy as well as the fact that they are unconsciously doing philosophy even when they are doing science. For instance, what exactly was the philosophy-hating Feynman talking about when he gave the eloquent Messenger Lectures that became “The Character of Physical Law“? Feynman was talking about the virtues of science, about the methodology of science, about the imperfect march of science toward the truth; in other words he was talking about what most of us would call “the philosophy of science”. There’s also more than a few examples of what could fairly be called philosophical musings even in the technical “Feynman Lectures on Physics”. Even Tyson, when he was talking about the multiverse and quantum entanglement in “Cosmos” was talking philosophically.

I think at least part of the problem here comes from semantics. Most physicists don’t explicitly try to falsify their hypotheses or apply positive heuristics or keep on looking for paradigms shifts in their daily work, but they are doing this unconsciously all the time. In many ways philosophy is simply a kind of meta, higher level look at the way science is done. Now sometimes philosophers of science are guilty of thinking that science in fact fits the simple definitions engendered by this meta level look, but that does not mean these frameworks are completely inapplicable to science, even if they may be messier than what they appear on paper. It’s a bit like saying that Newton’s laws are irrelevant to entities like black holes and chaotic systems because they lose their simple formulations in these domains.

I think there are plenty of episodes in the history of science that support this view. When science was still in a primitive state, almost all musings about it came first from Greek philosophers and later from Asian, Arab and European thinkers who were called “natural philosophers” for a reason. Anyone who contemplated the nature of earthly forces, wondered what the stars were made up of, thought about whether living things change or are always constant or pondered if there is life after death was doing philosophy. But he or she was also squarely thinking about science since we know for a fact that science has been able to answer these philosophical questions in the ensuing five hundred years. In this case philosophy stepped in where the era’s best science ended, and then science again stepped in when it had the capacity to answer these philosophical questions.

As another example, consider the deep philosophical questions about quantum mechanics pondered by the founders of quantum mechanics, profound thinkers like Bohr, Einstein and Heisenberg. These men were brilliant scientists but they were also bona fide philosophers; Heisenberg even wrote a readable book called “Physics and Philosophy“. But the reason why they were philosophers almost by default is because they understood that quantum mechanics was forcing a rethinking about the nature of reality itself that challenged our notions not just about concrete entities like electrons and photons but also about more ethereal ones like consciousness, objectivity and perception. Bohr and Heisenberg realized that they simply could not talk about these far flung implications of physics without speaking philosophically. In fact some of the most philosophical issues that they debated, such as quantum entanglement, were later validated through hard scientific experiments; thus, if nothing else, their philosophical arguments helped keep these important issues alive. Even among the postwar breed of physicists (many of whom were of the philosophy-averse, “shut up and calculate” type) there were prominent philosophers like John Wheeler and David Bohm, and they again realized the value of philosophy not as a tool for calculation or measurement but simply as a guide to thinking about hazy issues at the frontiers of science. In some sense it’s a good sign then when you start talking philosophically about a scientific issue; it means you are really at the cutting edge.

The fact of the matter – and a paradox of sorts – is that science grows fastest at its fringes, but it’s also at the fringes that it is most uncertain and unable to reach concrete conclusions. That is where philosophy steps in. You can think of philosophy as a kind of stand-in that’s exploring the farthest reaches of scientific thinking while science is maturing and retooling itself to understand the nature of reality. Tyson, Hawking, Krauss, and in fact all of us, are philosophers in that respect, and we should all feel the wiser for it.