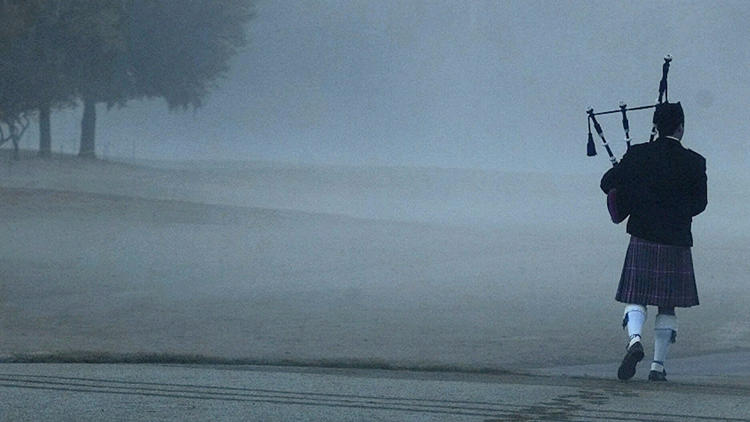 Doctors say mold and fungi lurking inside bagpipes probably caused a fatal infection they called “bagpipe lung.” Above, a bagpipes player in Houston in 1999.

Doctors have an important message for musicians: Don’t forget to clean your instruments. It could be a matter of life and death.

Their warning was inspired by a 61-year-old British bagpipe player who developed a dry cough and breathlessness that worsened over a period of seven years. His condition became so severe that he could walk only 22 yards before tuckering out. Previously, he’d been able to walk far enough to finish a 10K, according to a case reportpublished Monday in the journal Thorax.

Doctors diagnosed him with hypersensitivity pneumontitis, or HP, a rare disease of the lungs. HP is the result of an allergic reaction to mold, fungus, dust or other substances a patient breathes. As a result, the tiny spaces in the lungs between the air sacs, airways and blood vessels become inflamed, and breathing can be severely impaired.

Typical triggers for HP include exposure to birds or household mold caused by excessive water damage, but the patient had no history of either. Nor did he have a history of smoking. Doctors prescribed the steroid prednisolone and the immunosuppressive drug azathioprine, but they had little to no effect.

The only thing that seemed to work was a three-month sojourn in Australia. While there, the man’s symptoms improved and he said he could walk along the beach more than six miles without stopping.

Doctors later realized that the reason his breathing improved in Australia was that he had left his bagpipes in the United Kingdom.

At home, the man played his bagpipes daily, even as his breathing deteriorated and more medications were added to his drug regimen.

Eventually, the patient’s condition became so bad that he had to be hospitalized. There, doctors treated him with a cocktail of IV antibiotics and an antifungal drug.

After he was admitted to the hospital, it occurred to someone to test his bagpipes to see whether they were the source of his HP.

The hunch proved correct. Samples of air from inside the bag were found to contain the fungi Rhodotorula mucilaginosa, Fusarium oxysporum and various species ofPenicillium.

Some of the fungi that grew in the lab after researchers tested the patient’s bagpipes.

The neck of the blowpipe added Trichosporon mucoides to the mix, and the chanter reed protector — the part of the instrument responsible for carrying the melody — had many of these same fungi as well.

A collection of fungi sampled from the bagpipes’ chanter reed protector.

In retrospect, the instrument seems like an obvious culprit. Several of these fungi are known to trigger HP, the report authors wrote, and “the moist environment of bagpipes promotes yeast and mould contamination, thereby making the chronic inhalation of offending antigens a likely trigger.”

The authors were able to find two other cases of musicians being sickened by their instruments. Both of them — a saxophone player and a trombone player — got better after they made a habit of cleaning their instruments with disinfectants and antiseptics.

Alas, the hospitalized patient never got a chance to improve his bagpipe hygiene. He died several weeks after entering the hospital.

But he will live on in the annals of medicine as the first person known to succumb to “bagpipe lung.”