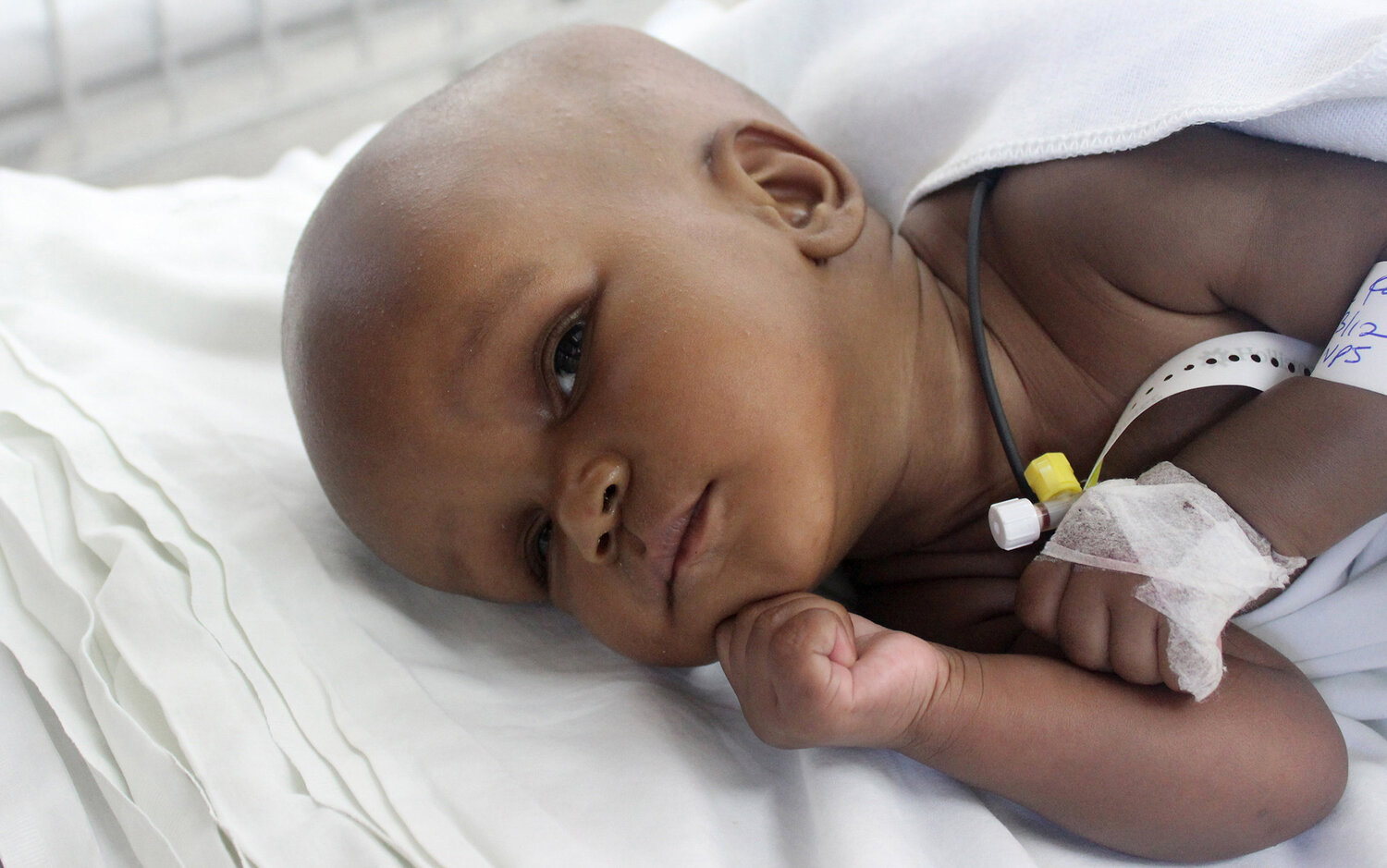 About 180,000 babies develop hydrocephalus each year in sub-Saharan Africa. Baby Faridah received treatment for the deadly condition this year at the CURE Children’s Hospital of Uganda in Mbale, Uganda.

It’s not every day that surgeons develop a new brain surgery that could save tens of thousands of babies, even a hundred thousand, each year. And it’s definitely not every day that the surgery is developed in one of the world’s poorest countries.

But that’s exactly what neurosurgeons from Boston and Mbale, Uganda, report Wednesday in the New England Journal of Medicine.

The treatment is for a scary condition in which a baby’s head swells up, almost like balloon. It’s called hydrocephalus, or “water on the brain.” But a more accurate description is “spinal fluid inside the brain.”

Inside our brains, there are four chambers that continually fill up and release spinal fluid. So their volume stays constant.

In babies with hydrocephalus, the chambers don’t drain properly. They swell up, putting pressure on the brain. If left untreated about half the children will die, and the others will be badly disabled. 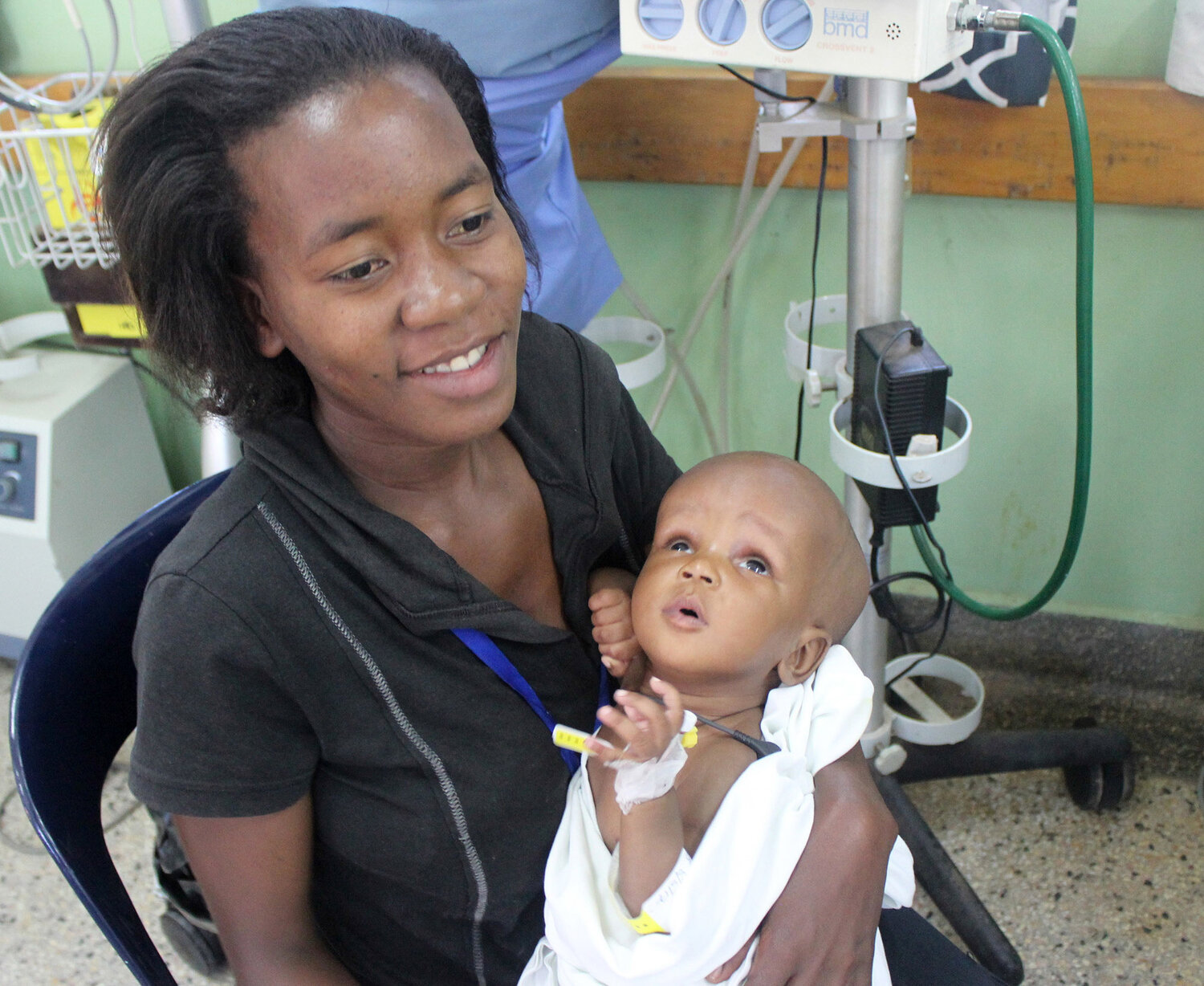 Traditionally doctors treat hydrocelphalus in the U.S. with what’s called a shunt: They place a long tube in the baby’s brain, which allows the liquid to drain into the child’s stomach.

But a third of the time, these shunts fail within two years, says Dr. Jay Riva-Cambrin, a neurosurgeon at the University of Calgary. “Imagine buying a car and having the dealer tell you, ‘By the way, there’s a 40 percent chance the car won’t be on the road in two years.’ You’d be like ‘No way.’ ”

That failure rate is tolerable here in the U.S. because children can be rushed quickly to a hospital for emergency surgery to fix the shunt, says Dr. Benjamin Warf, a neurosurgeon at Harvard Medical School, who led the development of the new method at a clinic in Mbale, Uganda. “Some kids wind up having dozens of these shunt operations over over the years,” he says.

But for many kids in rural Uganda — and other poor countries — emergency neurosurgery isn’t an option. “They’re going to die from a shunt malfunction,” Warf says. “I can’t put a shunt in a baby and then send them back to a rural village in western Uganda or southern Sudan because it would take days to return to the clinic.”

So Warf and his colleagues decided to innovate. They took a technique that works in adults and then tweaked it a bit so that it would have a better chance of working with babies.

In the new method, doctors basically poke a hole in the brain’s chambers so they can drain. They also prevented the chambers from filling back up by partially damaging the region of the brain that produces spinal fluid.

The team knew the procedure fixed the hydrocephalus. They could see that the babies’ brains stopped swelling. But the big question was whether or not the method could prevent brain damage as effectively as shunting does.

After 15 years of testing and optimizing, he and his team can finally say that their approach — at least in the short term — appears to be just as effective as the procedure commonly used here in the U.S.

In the study, Warf and his colleagues tested the two methods on about 100 children in Uganda. After 12 months, the doctors couldn’t detect a difference in the children’s brain volume or cognitive skills.

“Although there are big caveats to the study, I’m just so thrilled about it,” says Dr. Tamara Simon, a pediatrician at the University of Washington, who wasn’t involved in the study.

In particular, Simon says, the study followed the children only for only about a year. “We need a better handle on cognitive outcomes in general and more long-term studies,” she says.

And all the children in the study had very low cognitive scores due to the brain infection that can cause hydrocephalus, so it might have been difficult to detect differences in outcomes between the two surgical methods.

“Still though, the work is really exciting, and I hope a similar study can now be done in the U.S.,” Simon adds.

Yes, you read that correctly. The new technique has been so successful in developing countries that American doctors are now traveling to Uganda to learn how to do the technique from Ugandan doctors.

“The doctors at the clinic in Uganda are wizards at the [new] method,” Riva-Cambrin says. “They’re the ones that taught me the procedure.”

Scientists at The Scripps Research Institute (TSRI) have identified a molecule in the brain that triggers schizophrenia-like behaviors, brain changes and global gene expression in an animal model. The research gives scientists new tools for someday preventing or treating psychiatric disorders such as schizophrenia, bipolar disorder and autism.

“This new model speaks to how schizophrenia could arise before birth and identifies possible novel drug targets,” said Jerold Chun, a professor and member of the Dorris Neuroscience Center at TSRI who was senior author of the new study.

The findings were published April 7, 2014, in the journal Translational Psychiatry.

According to the World Health Organization, more than 21 million people worldwide suffer from schizophrenia, a severe psychiatric disorder that can cause delusions and hallucinations and lead to increased risk of suicide.

Although psychiatric disorders have a genetic component, it is known that environmental factors also contribute to disease risk. There is an especially strong link between psychiatric disorders and complications during gestation or birth, such as prenatal bleeding, low oxygen or malnutrition of the mother during pregnancy.

In the new study, the researchers studied one particular known risk factor: bleeding in the brain, called fetal cerebral hemorrhage, which can occur in utero and in premature babies and can be detected via ultrasound.

In particular, the researchers wanted to examine the role of a lipid called lysophosphatidic acid (LPA), which is produced during hemorrhaging. Previous studies had linked increased LPA signaling to alterations in architecture of the fetal brain and the initiation of hydrocephalus (an accumulation of brain fluid that distorts the brain). Both types of events can also increase the risk of psychiatric disorders.

“LPA may be the common factor,” said Beth Thomas, an associate professor at TSRI and co-author of the new study.

To test this theory, the research team designed an experiment to see if increased LPA signaling led to schizophrenia-like symptoms in animal models.

Hope Mirendil, an alumna of the TSRI graduate program and first author of the new study, spearheaded the effort to develop the first-ever animal model of fetal cerebral hemorrhage. In a clever experimental paradigm, fetal mice received an injection of a non-reactive saline solution, blood serum (which naturally contains LPA in addition to other molecules) or pure LPA.

The real litmus test to show if these symptoms were specific to psychiatric disorders, according to Mirendil, was “prepulse inhibition test,” which measures the “startle” response to loud noises. Most mice—and humans—startle when they hear a loud noise. However, if a softer noise (known as a prepulse) is played before the loud tone, mice and humans are “primed” and startle less at the second, louder noise. Yet mice and humans with symptoms of schizophrenia startle just as much at loud noises even with a prepulse, perhaps because they lack the ability to filter sensory information.

Indeed, the female mice injected with serum or LPA alone startled regardless of whether a prepulse was placed before the loud tone.

Next, the researchers analyzed brain changes, revealing schizophrenia-like changes in neurotransmitter-expressing cells. Global gene expression studies found that the LPA-treated mice shared many similar molecular markers as those found in humans with schizophrenia. To further test the role of LPA, the researchers used a molecule to block only LPA signaling in the brain.

This research provides new insights, but also new questions, into the developmental origins of psychiatric disorders.

For example, the researchers only saw symptoms in female mice. Could schizophrenia be triggered by different factors in men and women as well?

“Hopefully this animal model can be further explored to tease out potential differences in the pathological triggers that lead to disease symptoms in males versus females,” said Thomas.

In addition to Chun, Thomas and Mirendil, authors of the study, “LPA signaling initiates schizophrenia-like brain and behavioral changes in a mouse model of prenatal brain hemorrhage,” were Candy De Loera of TSRI; and Kinya Okada and Yuji Inomata of the Mitsubishi Tanabe Pharma Corporation.

In ventriculoperitoneal (VP) shunt surgery, laparoscopic assistance can be used for placement of the peritoneal catheter. Until now, the efficacy of laparoscopic shunt placement has been investigated only in retrospective and nonrandomized prospective studies, which have reported decreased distal shunt dysfunction rates in patients undergoing laparascopic placement compared with mini-laparotomy cohorts. In this randomized controlled trial the authors compared rates of shunt failure in patients who underwent laparoscopic surgery for peritoneal catheter placement with rates in patients who underwent traditional mini-laparotomy.

One hundred twenty patients scheduled for VP shunt surgery were randomized to laparoscopic surgery or mini-laparotomy for insertion of the peritoneal catheter. The primary endpoint was the rate of overall shunt complication or failure within the first 12 months after surgery. Secondary endpoints were distal shunt failure, overall complication/ failure, duration of surgery and hospitalization, and morbidity.

While overall shunt failure rates were similar in the 2 groups, the use of laparoscopic shunt placement significantly reduced the rate of distal shunt failure compared with mini-laparotomy.

Overdrainage of CSF remains an unsolved problem in shunt therapy. The aim of the present study was to evaluate treatment options on overdrainage-related events enabled by the new generation of adjustable gravity-assisted valves.

The authors found 39 cases (15.6%) involving overdrainage-related problems—23 primary and 16 secondary overdrainage. The median follow-up period in these 39 patients was 2.1 years. There was no correlation between the incidence of overdrainage and any of the following factors: sex, age, size, or weight of the patients. There was also no statistical significance among the different etiologies of hydrocephalus, with the exception of congenital hydrocephalus. All of the “complications” could be resolved by readjusting the opening pressure of the valve in one or multiple steps, avoiding further operations.

Modern adjustable and gravity-assisted valves enable surgeons to set the opening pressure relatively low to avoid underdrainage without significantly raising the incidence of overdrainage and to treat overdrainage-related clinical and radiological complications without surgical intervention.

The aim of this study was to evaluate and compare CSF flow after endoscopic third ventriculostomy (ETV) and endoscopic aqueductoplasty (EAP) in patients presenting with obstructive hydrocephalus caused by aqueductal stenosis.

In patients harboring aqueductal stenosis who underwent EAP (n = 8), ETV (n = 8), and both ETV and EAP (n = 6), CSF flow through the restored aqueduct and through the ventriculostomy was investigated using cine cardiac-gated phase-contrast MRI. For qualitative evaluation of CSF flow, an in-plane phase-contrast sequence in the midsagittal plane was used. The MR images were displayed in a closed-loop cine format. Quantitative through-plane measurements were performed in the axial plane perpendicular to the aqueduct and/or floor of the third ventricle.