Currently in the United States, about twice as many adults with appendicitis are treated without an operation as 20 years ago, but nonoperative management of an infected appendix is linked to a higher death rate in the hospital, according to the first large U.S. study to look at long-term trends in appendicitis.

Studies in Europe over the past two decades have shown that some patients with uncomplicated appendicitis can be treated successfully with antibiotics alone. These results appear to be driving the change in surgical practice for appendicitis in the United States. 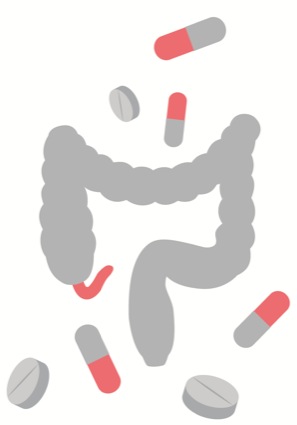 But this new study raises questions about whether a nonoperative approach is a safe option for older or medically complex patients.

After matching the cases in both treatment groups on age, sex and comorbidity index, the investigators reported a nearly sixfold increased death rate in the nonoperative care group. Compared with 0.08% of surgically treated patients with appendicitis, 0.47% of the nonoperatively managed patients died in the hospital.

“I am concerned that surgeons may be overextrapolating the European data and applying nonoperative management of appendicitis to patients for whom it is inappropriate,” said the study’s principal investigator Isaiah R. Turnbull, MD, PhD, assistant professor of acute and critical care surgery, Washington University School of Medicine, in St. Louis. “We as a community of surgeons need to consider whether nonoperative management of uncomplicated appendicitis, such as an antibiotics-first approach, is appropriate for these high-risk patients.”

Dr. Turnbull presented the findings at the 2017 Clinical Congress of the American College of Surgeons. The study was published last month in the Journal of Surgical Research (pii: S0022-4804[17]30661-3).

The researchers analyzed the type of treatment for 477,680 adults with a primary diagnosis of appendicitis between 1998 and 2014 included in the National Inpatient Sample, a database of hospitalized patients representing more than 96% of the U.S. population.

Although the database did not specify whether the appendix had ruptured, investigators excluded patients who had a peritoneal abscess, as well as patients younger than 18 years of age and those who had elective admission.

Over the study period, the proportion of patients treated with an early operation decreased from 94.6% to 92.1%. Use of nonoperative management increased twofold, from 2.3% of patients with appendicitis in 1998 to 4.9% in 2014. Most of the remaining patients had an operation later than the second day in the hospital.

Additionally, in 135,856 patients with appendicitis from 2010 to 2014, the investigators compared patient characteristics and outcomes. A total of 131,162 patients underwent an early operation, primarily an appendectomy on the day of hospital admission or the next day. Another 4,694 patients received nonoperative management, defined as no operation or placement of an abdominal drain. It is not clear from this data set whether these patients received antibiotic therapy.

In this subgroup of patients from the most recent five-year period, those receiving nonoperative management were, on average, eight years older than patients in the early operation group—49 versus 41 years. They also had a significantly higher comorbidity index, with a score of 1.35 compared with 0.78.

The odds of dying of any cause during the hospitalization was 2.4 times higher in patients who had no operation compared with those who underwent an early operation.

“Our findings suggest that U.S. surgeons are selecting elderly, sicker patients for nonoperative management, possibly because they believe these patients are not good candidates for an operation,” Dr. Turnbull said. “However, these patients are at increased risk of a poor outcome if nonoperative management fails because they lack the physiologic reserve or ability to tolerate illness.” Many of the European studies of antibiotic treatment for appendicitis excluded elderly patients and had a patient age that was much younger than in this U.S. database, he said.

This is the first known study to show an association between nonoperative management of appendicitis and death. Mortality is rare in appendicitis, so tracking it requires a large data set.

Dr. Turnbull said he was cautious about making clinical recommendations based on this study alone, saying the primary conclusion from these data is that more information is needed. “That said, for me, I would counsel my colleagues that these data suggest that nonoperative management may not be appropriate for elderly patients or patients with significant medical comorbidities.”

The ongoing CODA trial is expected to provide some answers on how to best treat elderly patients as it is open to adults of all ages. It explicitly excludes several populations of medically complicated patients, such as those who have liver failure, immunologic deficiency, or second infectious conditions such as pneumonia.

Lead investigators in the CODA trial said the study presented at the ACS is interesting, but caution should be applied when interpreting the results. Giana H. Davidson, MD, MPH, assistant professor at the University of Washington, said early results from CODA show that surgeons have significant bias in giving treatment recommendations and patients have preferences that drive treatment decisions, which will not be accounted for using administrative data. “These preferences may also be associated with worse outcomes.”

David R. Flum, MD, MPH, professor of surgery and director of the Surgical Outcomes Research Center at the University of Washington, in Seattle, said the CODA trial was developed to answer some of the questions raised by the new study. “There are real questions about actual rates of adverse outcomes with antibiotic management of appendicitis.” Dr. Flum is a member of the editorial board of General Surgery News.

“While it’s likely that claims-based studies like this may show higher rates of adverse events because of confounding, the finding of increased risk is worrisome. For antibiotics to be offered as an alternative to appendectomy in the United States, we need a rigorous [randomized controlled trial] to establish the comparative rate of adverse events. For this reason, we think antibiotics should remain in the research space until CODA is completed and the results are released in 2020.”

Both Dr. Davidson and Dr. Flum commented based on the study abstract.

Appendicitis is the most common intraabdominal surgical emergency in the United States, with more than 250,000 cases annually.

A meta-analysis can be useful when looking at a topic that has been studied by several different groups of investigators. The pooling of data from different published papers can sometimes bolster a conclusion about the effectiveness of a treatment.

However, a meta-analysis is only as good as the studies it includes, and the biases of those performing the meta-analysis can color the results.

Last month, a meta-analysis concerning antibiotics vs. surgery for the treatment of uncomplicated acute appendicitis by investigators from Nottingham University Hospitals was published in the World Journal of Surgery.

The authors concluded that “antibiotic therapy represents a safe, efficacious and viable treatment option for the treatment of uncomplicated acute appendicitis.” I disagree.

Five randomized trials involving 1430 subjects were included in the meta-analysis. After one year of follow-up, the efficacy of treatment for those receiving antibiotics was 62.2% compared with those undergoing appendectomy whose treatment efficacy was 88%. Depending on the inclusion or exclusion of a particularly weak study there was said to be a 39-52% risk reduction for complications in the antibiotic group.

This meta-analysis has so many problems that it is hard to know where to start.

Every year, 300,000 Americans with appendicitis are rushed into emergency surgery. Most think that if the appendix is not immediately removed, it will burst -with potentially fatal consequences.But now some doctors say there may another option: antibiotics.

Five small studies from Europe, involving a total of 1,000 patients, indicate that antibiotics can cure some patients with appendicitis; about 70% of whom took the pills did not require surgery . Those who wound up having an appendectomy after trying antibiotics first did not face any more complications than those who had surgery immediately .

“These studies seem to indicate that antibiotics can cure appendicitis in many patients,” said Dr David Talan, a specialist in emergency medicine and infectious diseases at the University of California, Los Angeles.”You at least have the chance of avoiding surgery altogether.”

Talan and others are planning a large clinical trial to compare people with appendicitis who receive antibiotics or surgery.

In preparation, Talan and his colleague Dr David Flum, a surgeon at the University of Washington, spent much of the past year asking patients if they would be interested in participating. Nearly half said yes. In another survey , nearly three-quarters of those who had already had an appendectomy said they would have preferred to try antibiotics first. By suggesting an antibiotic alternative, the researchers are bucking longstanding medical tradition.

Surgical treatment for appendicitis began in the 1880s, when surgery itself was something of a new idea. As surgery and anesthesia improved, however, the appendectomy became the treatment of choice. According to the medical thinking of the day , it made sense. But surprising as antibiotics might seem, this is not the first time they have emerged as a possible alternative.

When antibiotics became available in the 1940s and ’50s, doctors in England began giving them to patients with appendicitis, reporting excellent results.During the Cold War, when American sailors spent six months or more on nuclear submarines prohibited from surfacing, those who developed appendicitis were given antibiotics. “Those submariners did great and no deaths or complications were reported,” Flum said. But that did not put a dint in the perception of surgery as the top choice.

The planned clinical trial will attempt to answer important questions. Are antibiotics as good as surgery in curing appendicitis? Could they do so at less cost, avoiding a hospitalization afterward? It’s even not clear how the drugs should be administered.

Giana Davidson, surgeon at University of Washington, said, “We don’t have the answers to questions that matter to patients.What are the chances of it coming back? I just have a lot of hesitation to go away from a 30-minute operation that cures them for the rest of their lives.”

In about a third of patients, diagnoses other than appendicitis were evident.

Most adults with acute right lower quadrant abdominal pain now undergo computed tomography (CT) when suspicion for appendicitis is at least moderate. In a study from one teaching hospital in Wisconsin, researchers reviewed the results of CT scans ordered explicitly to evaluate 1571 consecutive adults for appendicitis or right lower quadrant pain. All patients were referred from the emergency department or urgent-care settings.

Comment: This study confirms that CT is useful not only to improve accuracy of clinical examination for appendicitis diagnosis but also to identify alternative causes of right lower abdominal pain. However, because the threshold for performing CT has become quite low, CT results will be normal or nonspecific in many cases. Note that most patients in this study underwent full abdominal and pelvic CT with intravenous and oral contrast and not just focused appendix CT.