The urge is often involuntary—and has little to do with actual remorse. 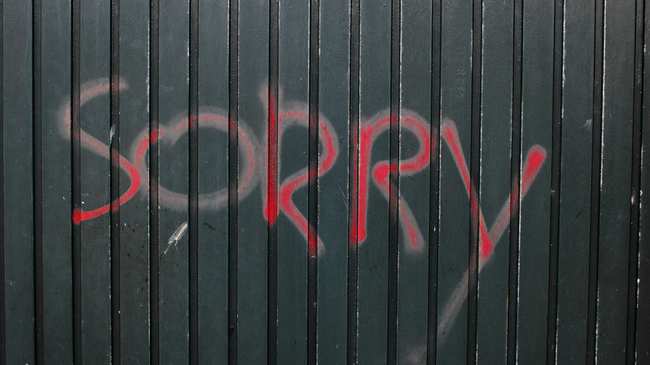 From a young age, people are taught that when they fuck up, they should apologize. But it’s one thing to express regret for being late to a party and another to apologize for what you decided to wear, or for eating too loudly, or for being in the way, or even for apologizing too much.

Apologies aren’t always helpful—and sometimes they can be excessive. This behavior may stem from anxiety or depression, although research on the topic is scarce. What we do know is that, for some, the urge to say “I’m sorry” for every little thing is involuntary and often has little to do with actual remorse.

“Depending on the purpose of the behavior and the context in which it is occurring, it could be conceptualized as a safety behavior, an overprotective behavior, or compensatory strategy,” says Martin Antony, director of the Anxiety Research and Treatment Lab at Ryerson University. “All of these are terms used to describe behaviors that are designed to protect an individual from aversive emotions or potential threat.”

Apologizing, an action that carries a lot of significance amongst humans, serves an important social function. It can show recognition and value for broken rules and, as the researchers at University of Florida put it, “minimize the negative repercussions of the incident and repair the actor’s damaged identity.”

But when anxiety gets in the way, apologizing can have the opposite effect. “I worry about always saying and doing the right thing,” says Kirsten Corley, a writer who classifies herself as a compulsive apologist. “When you suddenly reevaluate the situation and you realize ‘Oh, I could have said this differently, I could have done this differently,’ it triggers you to want to apologize, it triggers you to want to better the situation.”

In a blog post titled, “Anxiety Makes Me Want To Apologize For Absolutely Everything,” Corley listed the many things she sometimes says sorry about: “Thinking too much, talking too much, texting too much, trying entirely too hard, caring too much, showing it, coming on too strong, if I did. Apologize for the fact that I apologized.”

Over-apologizing can also be an indicator of more serious issues. Susan Heitler, a Denver-based clinical psychologist and author of Prescription Without Pills, says excessive apologizing can occur because of a hyperactive amygdala (the part of the brain that regulates emotions), or in unsafe relationships involving physical or verbal abuse.

“In that case, they may have learned the pattern as a way to stay safe,” Heitler says. “In an abusive relationship, if she’ll say, ‘Oh, I’m so sorry, I shouldn’t have done that,’ he feels scot-free and vindicated that what he wanted was right, so he’ll let go of it potentially. So it’s a safety maneuver.”

On the other hand, people with narcissistic personality disorder rarely, if ever, apologize, Heitler says. So there’s a balance to be found, and when done right, apologies can be extremely healthy. Bilateral, two-sided apologies—when both members of a couple recognize their role in conflict—can be signs of a highly functional relationship.

“It also predicts a relationship that will continue to be very strong and positive over time, because the couple has the ability to self-correct, learn and grow, and to heal breaches,” Heitler explains. While excessively apologizing may sometimes be a reflex, it’s not exactly a tic in the formal sense, “unless they are doing it as part of OCD [obsessive-compulsive disorder],” Antony explains.

Because this isn’t a neurologically engendered action, that means it’s possible for those afflicted with unrestrained guilt to amend this habit over time.

“If it was important for someone to reduce this behavior, the treatment would involve strategies for becoming more aware of the behavior, preventing the behavior, and providing people with other, more adaptive responses that they can use instead,” Antony says. “The treatment would likely occur as part of a broader treatment for whatever problem is leading to the excessive apologizing.”

It may also be helpful to consider the “spotlight effect,” the psychological sense that others are keeping close note of our failures. In reality, many people are too inwardly focused on themselves to notice or care much about the details you tend to overemphasize in your mind. Putting things in perspective can relax this reflex.

As Corley puts it, “If you’re caught in a moment where you really are being yourself and then anxiety kicks in and makes you question who you are, take a step back and say, ‘I don’t need to apologize for this.’”