Our species possesses inherent value, but we are devastating the earth and causing unimaginable animal suffering.

An overgrown lot along Highway 13 near the town of Haleyville, Ala.CreditWilliam Widmer for The New York Times. 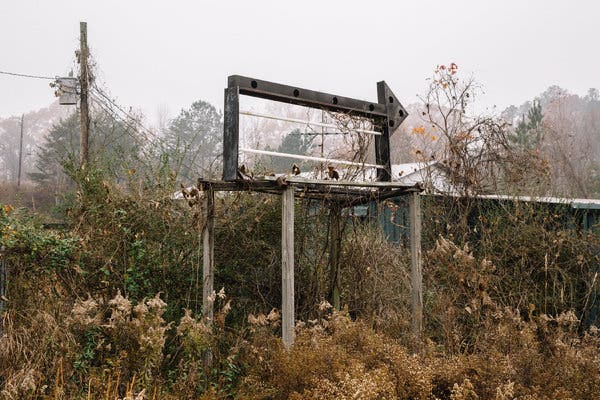 There are stirrings of discussion these days in philosophical circles about the prospect of human extinction. This should not be surprising, given the increasingly threatening predations of climate change. In reflecting on this question, I want to suggest an answer to a single question, one that hardly covers the whole philosophical territory but is an important aspect of it. Would human extinction be a tragedy?

To get a bead on this question, let me distinguish it from a couple of other related questions. I’m not asking whether the experience of humans coming to an end would be a bad thing. (In these pages, Samuel Scheffler has given us an important reason to think that it would be.) I am also not asking whether human beings as a species deserve to die out. That is an important question, but would involve different considerations. Those questions, and others like them, need to be addressed if we are to come to a full moral assessment of the prospect of our demise. Yet what I am asking here is simply whether it would be a tragedy if the planet no longer contained human beings. And the answer I am going to give might seem puzzling at first. I want to suggest, at least tentatively, both that it would be a tragedy and that it might just be a good thing.

To make that claim less puzzling, let me say a word about tragedy. In theater, the tragic character is often someone who commits a wrong, usually a significant one, but with whom we feel sympathy in their descent. Here Sophocles’s Oedipus, Shakespeare’s Lear, and Arthur Miller’s Willy Loman might stand as examples. In this case, the tragic character is humanity. It is humanity that is committing a wrong, a wrong whose elimination would likely require the elimination of the species, but with whom we might be sympathetic nonetheless for reasons I discuss in a moment.

To make that case, let me start with a claim that I think will be at once depressing and, upon reflection, uncontroversial. Human beings are destroying large parts of the inhabitable earth and causing unimaginable suffering to many of the animals that inhabit it. This is happening through at least three means. First, human contribution to climate change is devastating ecosystems, as the recent article on Yellowstone Park in The Times exemplifies. Second, increasing human population is encroaching on ecosystems that would otherwise be intact. Third, factory farming fosters the creation of millions upon millions of animals for whom it offers nothing but suffering and misery before slaughtering them in often barbaric ways. There is no reason to think that those practices are going to diminish any time soon. Quite the opposite.

Humanity, then, is the source of devastation of the lives of conscious animals on a scale that is difficult to comprehend.

To be sure, nature itself is hardly a Valhalla of peace and harmony. Animals kill other animals regularly, often in ways that we (although not they) would consider cruel. But there is no other creature in nature whose predatory behavior is remotely as deep or as widespread as the behavior we display toward what the philosopher Christine Korsgaard aptly calls “our fellow creatures” in a sensitive book of the same name.

If this were all to the story there would be no tragedy. The elimination of the human species would be a good thing, full stop. But there is more to the story. Human beings bring things to the planet that other animals cannot. For example, we bring an advanced level of reason that can experience wonder at the world in a way that is foreign to most if not all other animals. We create art of various kinds: literature, music and painting among them. We engage in sciences that seek to understand the universe and our place in it. Were our species to go extinct, all of that would be lost.

Now there might be those on the more jaded side who would argue that if we went extinct there would be no loss, because there would be no one for whom it would be a loss not to have access to those things. I think this objection misunderstands our relation to these practices. We appreciate and often participate in such practices because we believe they are good to be involved in, because we find them to be worthwhile. It is the goodness of the practices and the experiences that draw us. Therefore, it would be a loss to the world if those practices and experiences ceased to exist.

One could press the objection here by saying that it would only be a loss from a human viewpoint, and that that viewpoint would no longer exist if we went extinct. This is true. But this entire set of reflections is taking place from a human viewpoint. We cannot ask the questions we are asking here without situating them within the human practice of philosophy. Even to ask the question of whether it would be a tragedy if humans were to disappear from the face of the planet requires a normative framework that is restricted to human beings.

Let’s turn, then, and take the question from the other side, the side of those who think that human extinction would be both a tragedy and overall a bad thing. Doesn’t the existence of those practices outweigh the harm we bring to the environment and the animals within it? Don’t they justify the continued existence of our species, even granting the suffering we bring to so many nonhuman lives?

To address that question, let us ask another one. How many human lives would it be worth sacrificing to preserve the existence of Shakespeare’s works? If we were required to engage in human sacrifice in order to save his works from eradication, how many humans would be too many? For my own part, I think the answer is one. One human life would be too many (or, to prevent quibbling, one innocent human life), at least to my mind. Whatever the number, though, it is going to be quite low.

Or suppose a terrorist planted a bomb in the Louvre and the first responders had to choose between saving several people in the museum and saving the art. How many of us would seriously consider saving the art?

So, then, how much suffering and death of nonhuman life would we be willing to countenance to save Shakespeare, our sciences and so forth? Unless we believe there is such a profound moral gap between the status of human and nonhuman animals, whatever reasonable answer we come up with will be well surpassed by the harm and suffering we inflict upon animals. There is just too much torment wreaked upon too many animals and too certain a prospect that this is going to continue and probably increase; it would overwhelm anything we might place on the other side of the ledger. Moreover, those among us who believe that there is such a gap should perhaps become more familiar with the richness of lives of many of our conscious fellow creatures. Our own science is revealing that richness to us, ironically giving us a reason to eliminate it along with our own continued existence.

One might ask here whether, given this view, it would also be a good thing for those of us who are currently here to end our lives in order to prevent further animal suffering. Although I do not have a final answer to this question, we should recognize that the case of future humans is very different from the case of currently existing humans. To demand of currently existing humans that they should end their lives would introduce significant suffering among those who have much to lose by dying. In contrast, preventing future humans from existing does not introduce such suffering, since those human beings will not exist and therefore not have lives to sacrifice. The two situations, then, are not analogous.

It may well be, then, that the extinction of humanity would make the world better off and yet would be a tragedy. I don’t want to say this for sure, since the issue is quite complex. But it certainly seems a live possibility, and that by itself disturbs me.

There is one more tragic aspect to all of this. In many dramatic tragedies, the suffering of the protagonist is brought about through his or her own actions. It is Oedipus’s killing of his father that starts the train of events that leads to his tragic realization; and it is Lear’s highhandedness toward his daughter Cordelia that leads to his demise. It may also turn out that it is through our own actions that we human beings bring about our extinction, or at least something near it, contributing through our practices to our own tragic end.