The shouts of schoolchildren playing outside echoed through the gymnasium where an obstacle course was being set up.

There was the “Belgian sidewalk,” a wooden contraption designed to simulate loose tiles; a “sloping slope,” ramps angled at an ankle-unfriendly 45 degrees; and others like “the slalom” and “the pirouette.”

They were not for the children, though, but for a class where the students ranged in age from 65 to 94. The obstacle course was clinically devised to teach them how to navigate treacherous ground without having to worry about falling, and how to fall if they did.

“It’s not a bad thing to be afraid of falling, but it puts you at higher risk of falling,” said Diedeke van Wijk, a physiotherapist who runs WIJKfysio and teaches the course three times a year in Leusden, a bedroom community just outside Amersfoort, in the center of the country.

The Dutch, like many elsewhere, are living longer than in previous generations, often alone. As they do, courses that teach them not only how to avoid falling, but how to fall correctly, are gaining popularity. 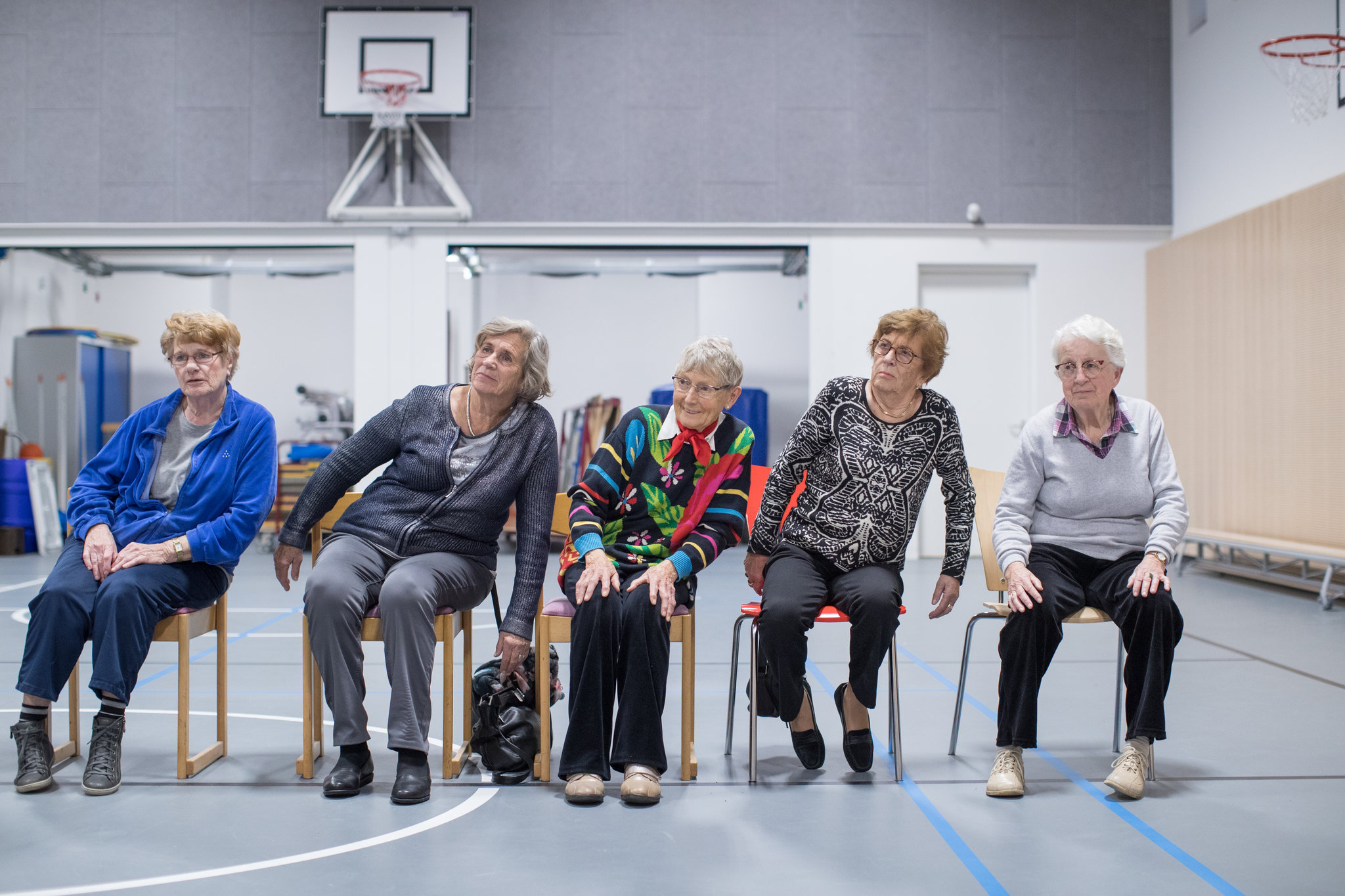 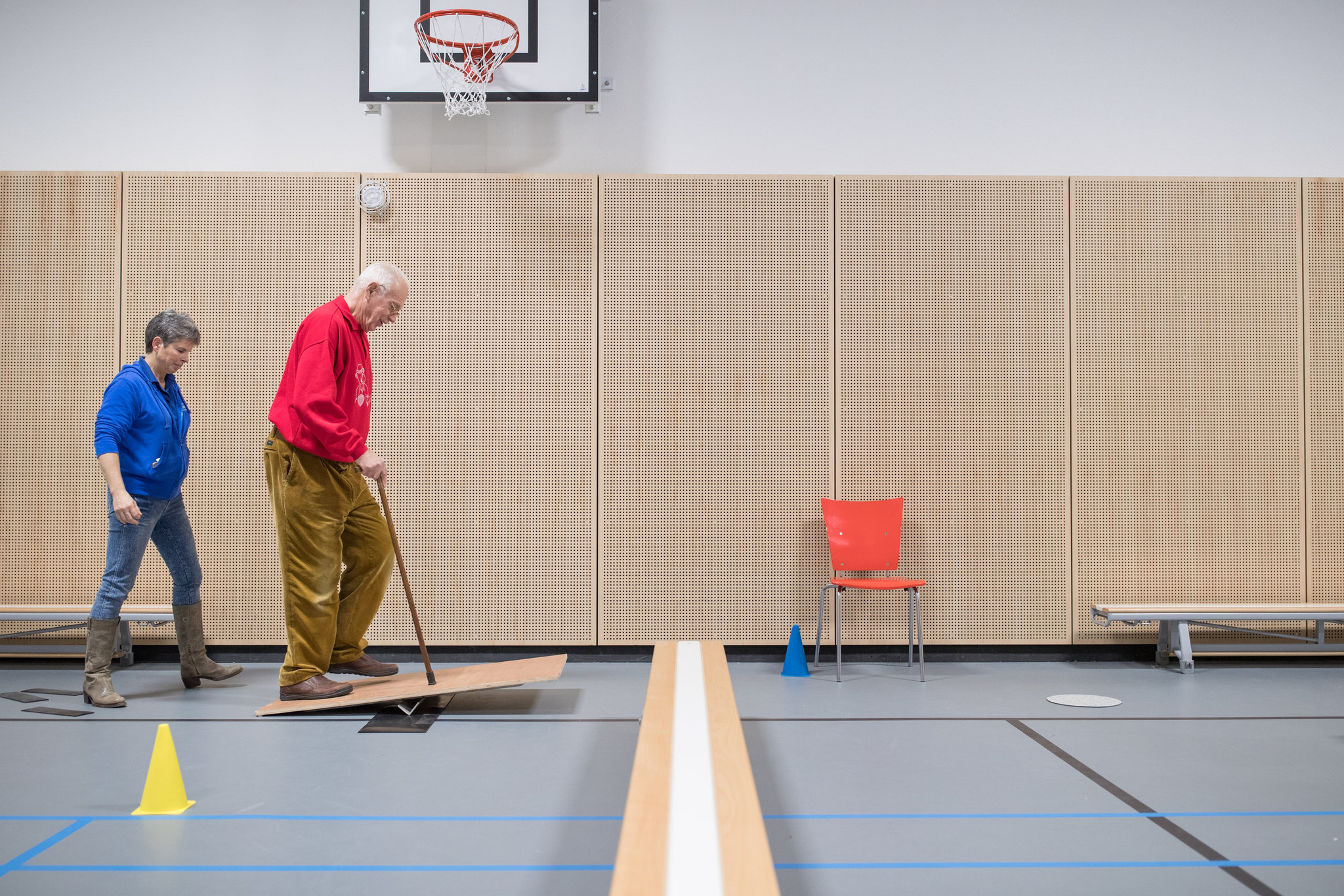 This one, called Vallen Verleden Tijd course, roughly translates as “Falling is in the past.” Hundreds of similar courses are taught by registered by physio- and occupational therapists across the Netherlands.

Yet falling courses — especially clinically tested ones — are a fairly recent phenomenon, according to Richard de Ruiter, of the Sint Maartenskliniek in Nijmegen, the foundation hospital that developed this particular course.

Virtually unheard-of just a decade ago, the courses are now common enough that the government rates them. Certain forms of Dutch health insurance even cover part of the costs.

While the students are older, not all of them seemed particularly frail. Herman van Lovink, 88, arrived on his bike. So did Annie Houtveen, 75. But some arrived with walkers and canes, and others were carefully guided by relatives. 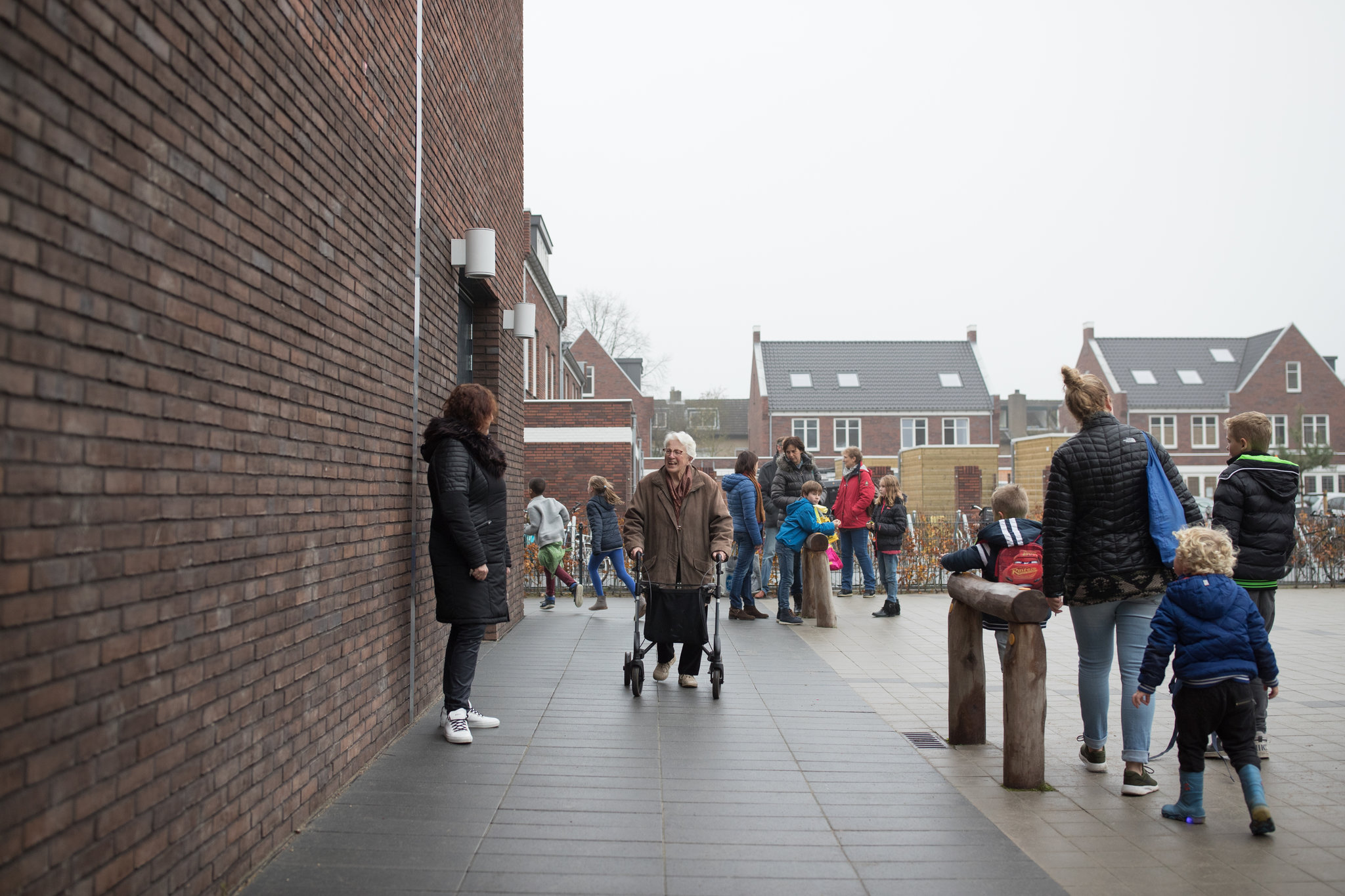 Falling can be a serious thing for older adults. Aging causes the bones to become brittle, and broken ones do not heal as readily.

Today, 18.5 percent of the Dutch population — roughly 3.2 million people — is 65 or older, according to official statistics. In 1950, about the time some of the younger course participants were born, people 65 or older made up just 7.7 percent of the population.

Experts say the rise in fatalities reflects the overall aging of the population, and also factors such as the growing use of certain medications or general inactivity.

“It’s same as with young children: More and more old people have an inactive lifestyle,” said Saskia Kloet, a program manager at VeiligheidNL, an institution that offers similar courses.

Even inactivity in one’s 30s or 40s could lead to problems later in life, she noted.

Like many people her age, Hans Kuhn, 85, worried that her daily routine — and the ability to live alone — would end if she ever lost her balance and fell.

She has lived in her house for decades, and alone since her partner died years ago. Its steeply winding staircase is equipped with a motorized chair on a rail to help reach upper floors. “I only use it when I have to bring lots of heavy things upstairs,” said Ms. Kuhn, herself a retired physiotherapist

Ms. Kuhn’s entire house is a study in efficiency and simple modifications that can make all the difference for an older person. Hand grips are installed in just the right places, as well as ramps to accommodate her two walkers.

There is a stationary exercise bike to keep her moving, and a weight machine made from a big can of beans and string to maintain her upper body strength.

Even as she feels herself grow frailer and less flexible, she knows how to stay fit. “My main problem is I’m very afraid of falling,” she said. 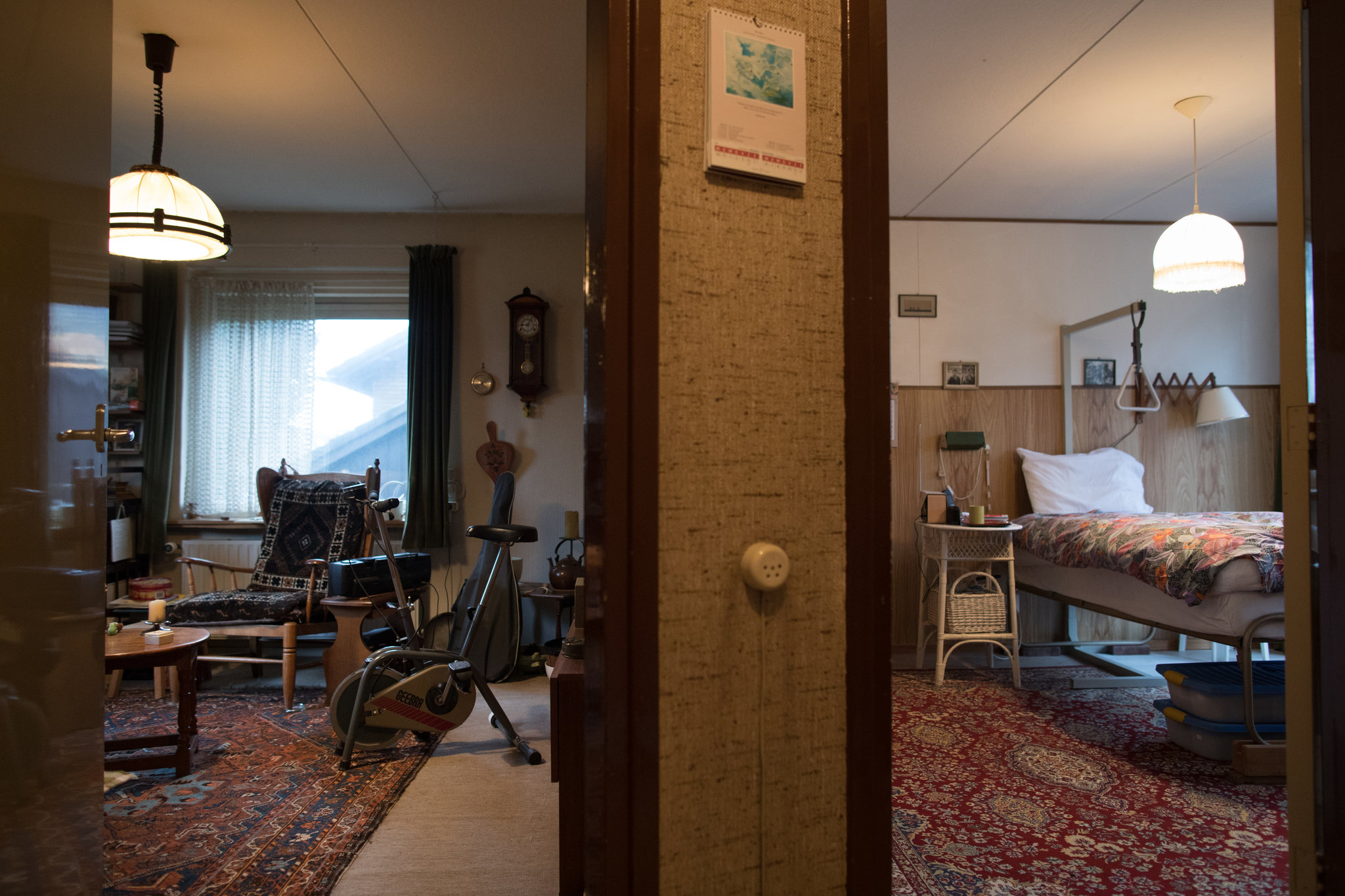 Ms. Kuhn’s bedroom, right, and home trainer. The house is a study in simple modifications that can make all the difference for an older person.

So she joined the course, which meets twice a week. On Tuesdays, the students build confidence by walking and re-walking the obstacle course. Thursdays are reserved for the actual falls.

In order to learn, the students start by approaching the mats slowly, lowering themselves down at first. Over the weeks, they learn to fall

“Naturally, they are not interested in courses on falling at first, but once they see that they can do it, then it’s fun,” Ms. Kloet said. “But there is also a very important social aspect.”

Indeed, seeing one another helplessly sprawled across the gym mats gave way to giggling and plenty of dry comments, knowing jokes, general ribbing and hilarity.

“Stop your chattering,” Ms. van Wijk warned a group of well-dressed women who were supposed to be concentrating on the correct way to let themselves fall onto the foot-thick blue mat. 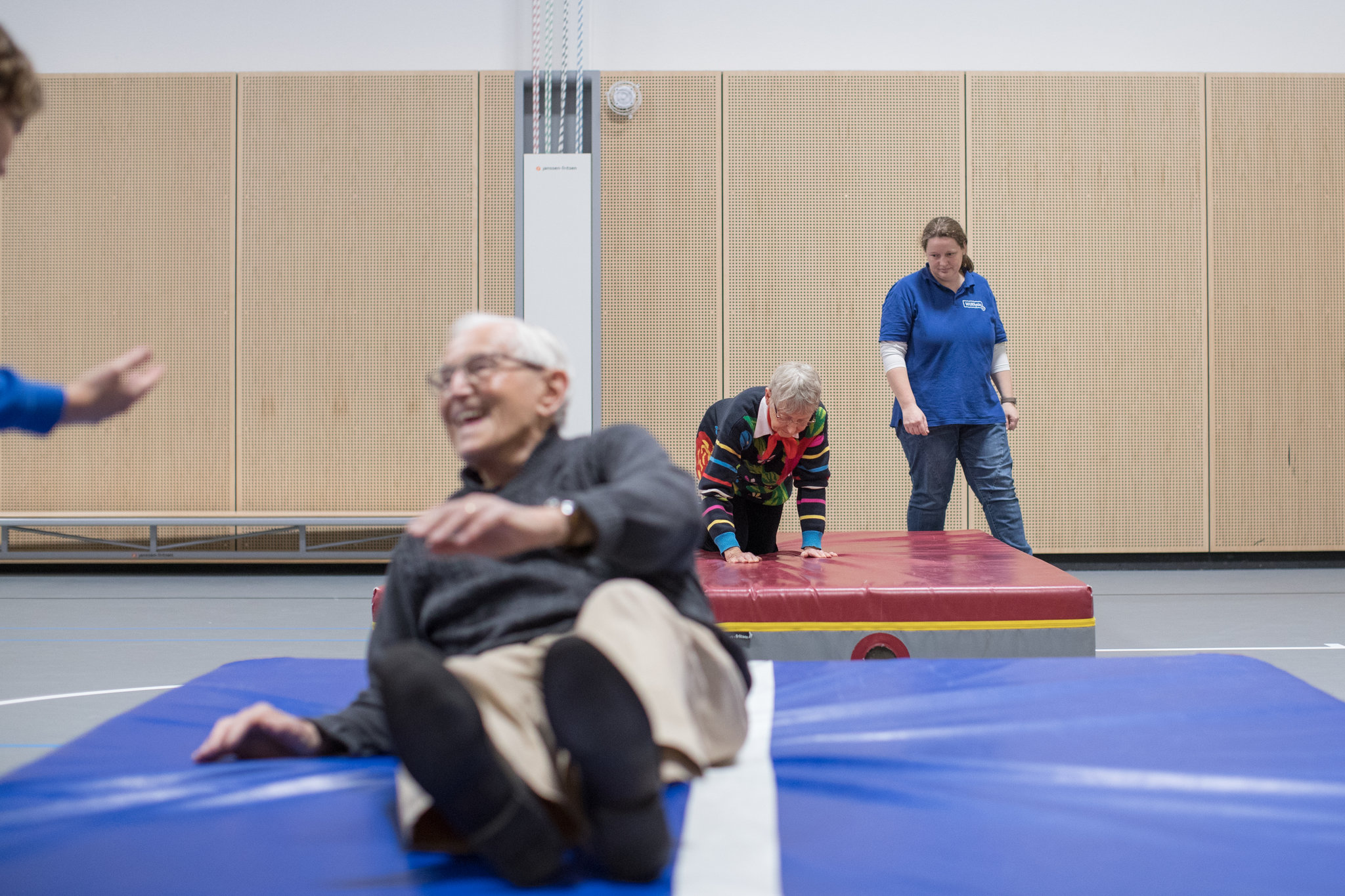 Ms. Silkens, right, and Frans Poss, 94, left, training on how to fall and get up. 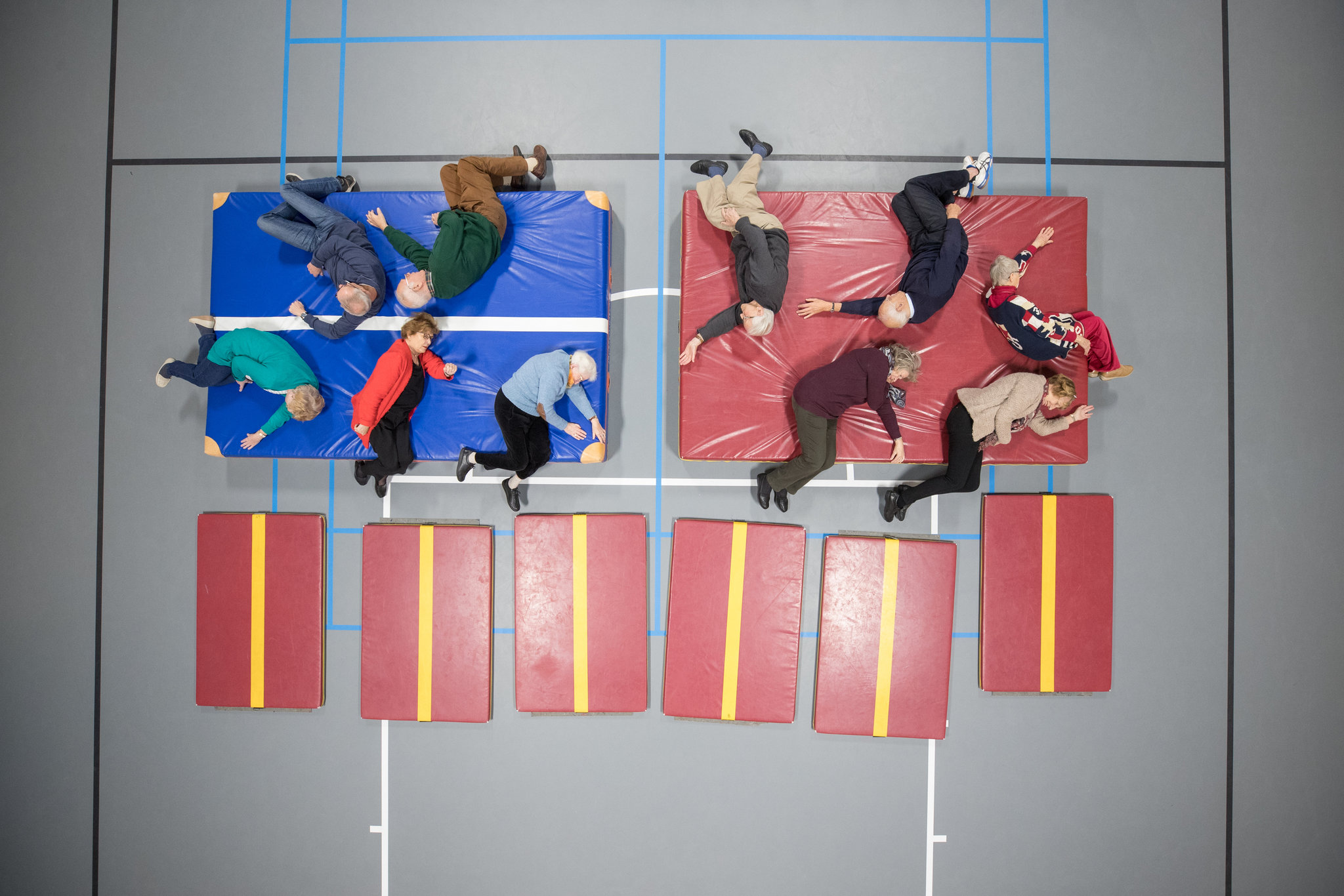 The students start by lowering themselves down onto the mats slowly. Over the weeks, they learn to fall. Credit Jasper Juinen for The New York Times

In preparing their bodies for a possibly apocalyptic event, the students appeared to forget about their age.

Mr. van Lovink, the cyclist, asked if they would learn standing on one leg. “Why would you want to do that?” replied Ms. van Wijk.

“To be able to put on my pants,” Mr. van Lovink said seriously, but to the amusement of his classmates.

Ms. van Wijk advised them all to always sit when putting on their pants.