Elon Musk is right: silly and fun things are important. But some of them are an indefensible waste of resources

The much-anticipated launch of Musk’s Falcon Heavy rocket, the most powerful every launched by a private company, went off without a hitch. Musk successfully sent his cherry-red Tesla roadster hurtling toward Mars, launching what a CNN commentator called “a new space age”.

Musk expects the rocket and car to orbit the sun for hundreds of millions of years, though some experts have speculated that it will disintegrate within a year. The event attracted phenomenal publicity: at one point, 2.3 million viewers were watching the event’s livestream, making the rocket launch a masterstroke of advertising for Tesla.

Meanwhile, in Syria, where hundreds of thousands of refugees may be forced to return to unsafe homes amid “global anti-refugee backlash”, an anti-government activist said despondently that he is no longer sure why he bothers to videotape the effects of bombing, since nobody ever pays attention: “I don’t know what the point is.” The UN human rights coordinator for Syria pondered what level of violence it would take to make the world care, saying that they are “running out of words” with which to try to describe the crisis. 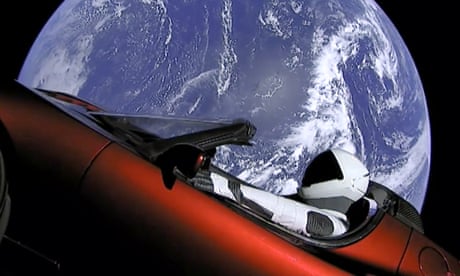 There is, perhaps, no better way to appreciate the tragedy of 21st-century global inequality than by watching a billionaire spend $90m launching a $100,000 car into the far reaches of the solar system.

Musk said he wants to participate in a space race because “races are exciting” and that while strapping his car to a rocket may be “silly and fun … silly and fun things are important.” Thus, anyone who mentions the colossal waste the project involves, or the various social uses to which these resources could be put, can be dismissed as a killjoy.

But one doesn’t have to hate fun to question the justification for pursuing a costly new space race at exactly this moment. If we examine the situation honestly, and get past our natural (and accurate) feeling that rockets are really cool, it becomes hard to defend a project like this.

A mission to Mars does indeed sound exciting, but it’s important to have our priorities straight. First, perhaps we could make it so that a child no longer dies of malaria every two minutes. Or we could try to address the level of poverty in Alabama that has become so extreme the UN investigator did not believe it could still occur in a first-world country. Perhaps once violence, poverty and disease are solved, then we can head for the stars.

Many might think that what Elon Musk chooses to do with his billions is Elon Musk’s business alone. If he wanted to spend all his money on medicine for children, that would be nice, but if he’d like to spend it making big explosions and sending his convertible on a million-mile space voyage, that’s his prerogative.

But Musk is only rich enough to afford these indulgent pet projects because we have allowed gross social inequalities to arise in the first place. If wealth were actually distributed fairly in this country, nobody would be in a position to fund his own private space program.

Yet even on the theory that there’s no moral problem with frittering away hundreds of millions of dollars, and inequality is fine, there’s another reason we are permitted to care about what Musk does. A great deal of his fortune is not actually his own: it’s ours.

Musk’s empire is fueled by billions of dollars in government subsidies. The Los Angeles Times revealed in 2015 that Musk’s companies benefit from “grants, tax breaks, factory construction, discounted loans and environmental credits”, plus the tax credits and rebates that are granted to consumers for buying his products.

The average household income of a Tesla purchaser is in the multiple hundreds of thousands, yet the federal government pays people $7,500 to buy them through tax credits, and many states offer their own cash handouts. Because we’re all giving Elon Musk money, what he chooses to do with that money is very much our business.

Elon Musk is right: silly and fun things are important. But some of them are an indefensible waste of resources. While there are still humanitarian crises such as that in Syria, nobody can justify vast spending on rocketry experiments. That point was made plain in 1970 by poet Gil Scott-Heron, in his record Whitey On The Moon, which criticized the US for spending millions to send men on a pointless moon adventure while the country’s inner cities languished:

“I can’t pay no doctor bills

But whitey’s on the moon

While whitey’s on the moon.”

Whitey may not have gone back to the moon recently. But his sports car is now in space.