The proportion of medical procedures unsupported by evidence may be nearly half. 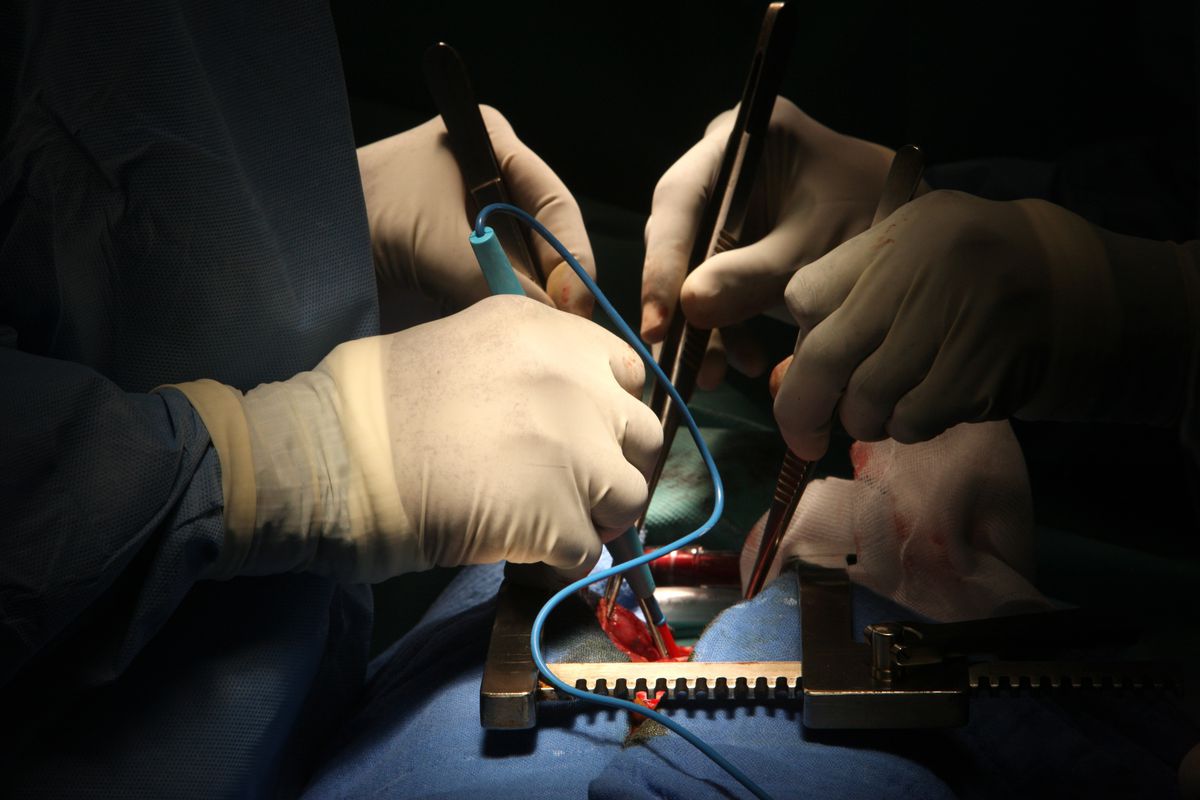 Outside contributors’ opinions and analysis of the most important issues in politics, science, and culture.

The recent news that stents inserted in patients with heart disease to keep arteries open work no better than a placebo ought to be shocking. Each year, hundreds of thousands of American patients receive stents for the relief of chest pain, and the cost of the procedure ranges from $11,000 to $41,000 in US hospitals.

But in fact, American doctors routinely prescribe medical treatments that are not based on sound science.

The stent controversy serves as a reminder that the United States struggles when it comes to winnowing evidence-based treatments from the ineffective chaff. As surgeon and health care researcher Atul Gawande observes, “Millions of people are receiving drugs that aren’t helping them, operations that aren’t going to make them better, and scans and tests that do nothing beneficial for them, and often cause harm.”

Of course, many Americans receive too little medicine, not too much. But the delivery of useless or low-value services should concern anyone who cares about improving the quality, safety and cost-effectiveness of medical care. Estimates vary about what fraction of the treatments provided to patients is supported by adequate evidence, but some reviewsplace the figure at under half.

Naturally that carries a heavy cost: One study found that overtreatment — one type of wasteful spending — added between $158 billion and $226 billion to US health care spending in 2011.

The stunning news about stents came in a landmark study published in November, in The Lancet. It found that patients who got stents to treat nonemergency chest pain improved no more in their treadmill stress tests (which measure how long exercise can be tolerated) than did patients who received a “sham” procedure that mimicked the real operation but actually involved no insertion of a stent.

There were also no clinically important differences between the two groups in other outcomes, such as chest pain. (Before being randomized to receive the operation or the sham, all patients received six weeks of optimal medical therapy for angina, like beta blockers). Cardiologists are still debating the study’s implications, and more research needs to be done, but it appears that patients are benefitting from the placebo effect rather than from the procedure itself.

Once a treatment becomes popular, it’s hard to dislodge

Earlier cases in which researchers have called into question a common treatment suggest surgeons may push back against the stent findings. In 2002, The New England Journal of Medicine published a study demonstrating that a common knee operation, performed on millions of Americans who have osteoarthritis — an operation in which the surgeon removes damaged cartilage or bone (“arthroscopic debridement”) and then washes out any debris (“arthroscopic lavage”) — worked no better at relieving pain or improving function than a sham procedure. Those operations can go for $5,000 a shot.

Many orthopedic surgeons and medical societies disputed the study and pressed insurance companies to maintain coverage of the procedure. Subsequent research on a related procedure cast further doubt on the value of knee surgeries for many patients with arthritis or meniscal tears, yet the procedures remain in wide use.

Other operations that have continued to be performed despite negative research findings include spinal fusion (to ease pain caused by worn disks), and subacromial decompression, which in theory reduces shoulder pain.

There have been fitful efforts to improve the uptake of empirical studies of medical practices by doctors — one seemingly promising initiative being the “Choosing Wisely”campaign, launched in 2012 by the American Board of Internal Medicine Foundation in partnership with Consumer Reports. Its goal is to get medical societies to develop lists of treatments of minimal clinical benefit to patients.

But Choosing Wisely seems to have had little impact so far. One study of that campaign’s results examined seven procedures that have widely been shown to be ineffective, including imaging tests for “uncomplicated” headaches, cardiac imaging for patients without a history of heart problems, and routine imaging for patients with low-back pain. In the two-to-three-year period leading up to 2013, only two of the seven practices targeted for reduction showed any decrease at all in the US. (And the declines were tiny: The use of scans for those uncomplicated headaches decreased from 14.9 percent to 13.4 percent, for instance.)

Granted, you can’t doctor by statistics alone. There’s an art to it, and uncertainty is part of the profession. But doctors can’t recommend the best therapies for their patients if hard evidence is missing on the comparative effectiveness of different treatments.

The knowledge gap is especially large for medical procedures, as opposed to drugs, since there is no FDA for surgery. Doctors learn about new procedures from colleagues, specialty society meetings, and information provided by medical device companies — a potentially arbitrary and unscientific process.

One root of the problem is that the coalition in favor of evidence-based medicine is weak. It includes too few doctors, commands too little attention and energy from elected officials and advocates, and it’s shot through with partisanship. Naturally, pharmaceutical companies and medical device makers wish to protect their profits, regardless of the comparative effectiveness vis a vis other treatments (or cost effectiveness) of what they are selling.

While virtually all doctors support evidence-based medicine in the abstract, clinicians and medical societies seek to maintain their professional and clinical autonomy. Physicians are sensitive to being second-guessed, even when their beliefs about how well treatments work are based on their own experiences and intuitions, not rigorous studies.

Politicians, who recognize that the public holds them in much lower regard than physicians, are hesitant to challenge the belief of many Americans that “doctor always knows best.” The American faith in markets leads to a cultural discomfort with government-imposed limits on the supply or consumption of medical technology. Meanwhile, other advanced democracies use such limits (along with price controls) as part of the toolkit to control medical spending and promote “value for money.”

Every health care system has to wrestle with tradeoffs among access, innovation, cost control, quality and the efficiency of resource allocation. Other countries, including the UK, may require a favorable cost effectiveness ratio before a treatment is placed on the national formulary — meaning that some treatments, such as some cancer drugs, won’t be recommended for routine funding if they are too expensive relative to their clinical benefits.

Many Americans would bridle at that kind of explicit rationing. Despite concerns about the rising cost of health care, for instance, Medicare routinely covers treatments that produce small benefits at significant social cost. In contrast to the British approach, Medicare generally covers treatments deemed “reasonable and necessary” — a definition that doesn’t include analysis of comparative effectiveness or cost in relation to other treatments. And what Medicare does influences the behavior of private insurers. (Commercial health plans cover a lot of that low-value CAT scanning.)

On the positive side, the US approach promotes access to new medical products, yet it doesn’t protect patients against the harms from receiving useless or low-value treatments. And it leaves less money to fund expensive therapies that have proven their worth.

The specter of “death panels” hovers over the debate

In the US, even modest reforms to use taxpayer money to fund research to learn what treatments work best, for which patients, have engendered controversy. Republicans famously charged that the establishment of the Patient-Centered Outcomes Research Institute (PCORI) through the Affordable Care Act, would lead to the creation of “death panels.” The politicians made that argument even though the agency only funds studies and was given no authority to make policy decisions or payment recommendations. PCORI has yet to have a significant impact on clinical practice. It faces a sunset date of 2019, and its future remains unclear.

It won’t be easy to get out of the political rut we are in, but there are ways to build public support for sensible solutions.

For our book on the subject, my co-authors Alan Gerber, Conor Dowling, and I conducted a series of public option surveys, and found that people would like more information about the benefits and risks of treatment options. But they’re indeed anxious that payers will use research findings to ration care or tie doctors’ hands.

Yet, on the hopeful side, the public has great confidence in the recommendations of doctors, not only about individual medical problems but also broader health policy matters. We found through survey experiments that if doctors were to become forceful advocates for evidence-based medicine, many of the public’s concerns would be allayed. (Our research also shows that other actors — drug companies, politicians and even patient advocacy groups — hold much less influence on public opinion.)

The deep reservoir of trust in physicians gives doctors both the civic responsibility and the political opportunity to spearhead efforts to address the problems of both over- and under-use of treatments. There is a small but growing movement among doctors to promote evidence-based practices — but they must battle some of the professional habits and biases I’ve outlined.

To build public support for needed changes, it is critical to distinguish the evidence-based medicine project — which is fundamentally about better science in medicine — from rationing and denial of beneficial services. There’s no logical reason to think evidence-based treatments will always be less expensive than low-value treatments. An important Rand study has shown that Americans fail to receive recommended treatments nearly half the time, for conditions ranging from diabetes to pneumonia.

One way to shift public perceptions of the evidence-based campaign would be for researchers, clinicians, and federal agencies to support and publicize research on the relative benefits (and risks) of treatments that some experts believe are being underused, at least in some patient groups. These could include not only low-cost treatments, such as statins and eye exams for people with diabetes, but also expensive, high-value treatments, like new drugs for hepatitis C (Sovaldi, Harvoni).

We know from experience how hard it is to limit the use of a treatment once it becomes ingrained. Treatments develop constituencies. This argues for insisting on strong evidence before new treatments are approved. However, there are costs to this approach: If approval procedures become too stringent, they could chill the development of breakthrough therapies as well as generate a political backlash.

A proposal from the Hamilton Project would give the Centers for Medicare and Medicaid Services (CMS) more resources to scrutinize medical technologies and allow the agency to experiment with “reference pricing”: Medicare would pay a single price for all treatments, for a given condition, that have similar therapeutic effects, up to a cost-effectiveness threshold. Patients who want to receive less cost-effective treatments could still get them, but they’d have to pay any difference out of pocket. That strikes the right balance.

Finally, evidence-based medicine won’t gain broad public acceptance so long as it remains a partisan issue. Much Republican rhetoric on this issue has been reckless. But one of the earliest advocates for a medical evidence research agency was Gail Wilensky, who ran Medicare under George H. W. Bush.

Eventually, the war over Obamacare will end. When it does, there may be an opening to have a sensible conversation about ensuring that patients receive treatments grounded in sound science.