Autistic women can go for years without diagnosis, and struggle at work as a result. One company is determined to do something about it.

Rachael Lucas’s “long history of walking out of very good jobs” began in her 20s after she quit her postgraduate degree at the University of Ulster. Working in different fields as a horse trainer, a childcare specialist, teacher trainer, and an advertising salesperson respectively, she would quickly become overwhelmed by the social elements of her job.

“I was good at the job,” she says, “but after six months walked out because I just couldn’t cope with it.” She eventually turned to temping: “I became very good at going into a situation and doing three or four months of very intense work and then being able to take a breather.”

After two decades in work, Lucas was diagnosed with autism at the age of 44. She now recognizes that her previous inability to keep a job was down to autism burnout, a colloquial term that describes what happens when people on the autism spectrum become overwhelmed and exhausted by stress. Choosing to work so infrequently was, she says, “my own way of managing the autism.”

Auticon, a German-founded social enterprise, is looking to change this by going on a recruitment drive for autistic women. The modus operandi of this IT consultancy start-up, which now has offices across Germany as well as in Paris and London, is to directly recruit autistic tech workers and then place them within other companies while supporting them at work.

The company has over 100 employees, and according to Viola Sommer, director and head of operations at Auticon in the UK, four-fifths of them are autistic. With investment from Richard Branson and UK charity the Esmée Fairbairn Foundation, the five-year-old company is already turning profit as it tries to help more autistic people get the most out of their skills. That goes for women, too.

Autism affects about one per cent of the world’s population, and that figure includes women. But women with autism have historically been under-diagnosed. Currently, various studies put the sex ratio of men to women diagnosed with autism between 3–2:1. A lack of diagnosis can have a profound effect on autistic women’s mental health and stack the odds against them when it comes to employment; while those with diagnoses have better access to the support services that exist, there’s little out there for the undiagnosed to gain and maintain long-term employment. 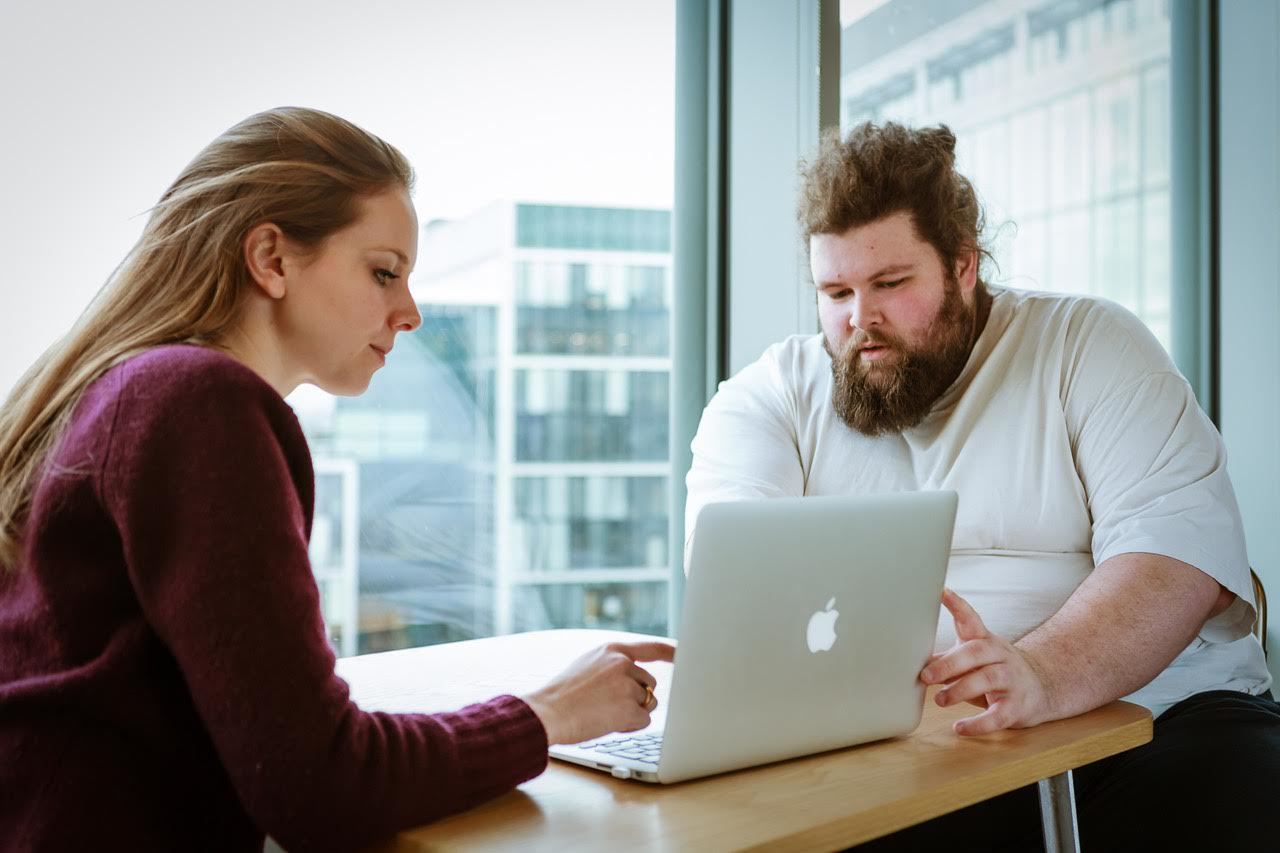 “A lot of autistic women tell me they’re trying to get a diagnosis, but the GP or psychiatrist says they can’t be autistic because they are female,” explains Sommer. “If GPs and psychiatrists are thinking that, it could also happen in the workplace.”

Autism researcher Simon Baron-Cohen’s “extreme male brain” theory argues that male brains tend towards systemizing—recognizing and analyzing patterns and data—while female brains are better at empathizing. People with autism are said to possess “extreme male brains,” in that their systemizing skills are hyper-developed. But Baron-Cohen’s theory has been criticized by other scientists, not least because it feeds into “neurosexist” stereotypes about male and female brains.

“All the diagnostic criteria for high functioning autism is based on men,” Sommer says. “How are you going to fit a woman into that criteria? There’s a shocking amount of people out there who are struggling and they can’t get a diagnosis and can’t get support.”

The result of a woman with autism being told that they are neurotypical (a term used to denote those who are not on the autism spectrum) is troubling, because, as Sommer says, “Women tend to be better at what’s called ‘masking,’ acting like a non-autistic person.” And years spent meticulously observing then mimicking behaviours in order to fit in with neurotypical coworkers can have devastating psychological effects.

It’s exhausting for people [when] a huge chunk of your cognitive capacity is put towards acting ‘normal.’

“It’s exhausting for people [when] a huge chunk of your cognitive capacity is put towards acting ‘normal,'” Sommer explains. “But if everyone knows you’re autistic, you don’t have to worry about it, you can be yourself and focus on the actual work.”

Emily Swiatek, 30, spent ten years working with autistic people before she realized she was one. Before that, she did her best to pass as a neurotypical person: “Women who mask often appear to be coping very well for a very long time. That’s because they’ll be putting all their energy and effort into succeeding at work. But what won’t be seen is the mental health difficulties that it can lead to; an autistic woman can reach a crisis point and it’s a shock to her employers, because it’s out of the pattern of her having been quite successful and high achieving.”

Swiatek’s mental health suffered as a result of constantly masking in the face of overwhelming social stimuli. Like Lucas, she had to take intermittent stints of “three to four months off work.” Swiatek explains that masking perhaps comes easily to women because “there are gendered expectations placed on women from a young age, based on ideas around: be nice, be sociable, make people feel comfortable, make people feel at ease.”

Emily Swiatek: “An autistic woman can reach a crisis point and it’s a shock to her employers.” Photo courtesy of the National Autistic Society.

While these expectations offer women some tips on how to conform, they can also stop them from getting the most out of their passions, commonly known as “special interests” to those on the autism spectrum. “Autistic people can have extreme hobbies and interests that they enjoy spending their time doing and are very good at doing,” Sommer explains. “Parents and educators should facilitate and promote that and funnel it towards a productive career path. But sadly, perhaps if it’s not agreeing with the gender role of the person, parents tend to shut it down.”

The Rain Man myth that all autistic people have exceptional abilities is further damaging when held up against statistics showing how infrequently autistic people’s skills are utilized. In the UK, only 16 percent of those with autism are in full-time employment. “The quality of applications from women is extremely high, and they have amazing technical skills, but perhaps little social skills,” says Sommer. “They fail at the interview process because it’s all about selling yourself, but there’s a huge potential of actual talent that companies are missing out on.”

If an autistic person’s work doesn’t tie in with their special interests, the result can be that person being inappropriately employed. “Many autistic people are unemployed, or employed much below their actual cognitive capacities,” she adds. “One of our expert coders was previously stacking shelves at a supermarket because that’s what he could cope with.”

Swiatek found that being a PA in marketing didn’t match with her interests, which include Arsenal Football Club players and their pet dogs. Neither did the office chatter expected of women: “Some of the conversations around TV and fashion and what other people are doing and wearing can be quite difficult to navigate. If you struggle to understand the conversational rules and boundaries, you won’t engage in those conversations.”

The isolation this causes might seem like a minor challenge, but it melds into a larger problem of how to deal with offices’ expectations of female workers. Some autistic women with a special interest in fashion or beauty may easily navigate office dress codes, but for others, “wearing something like tights or a tight blouse or high heels is going to be more challenging,” says Swiatek.

This can be down to a simple inability to pick up on the unwritten rules maintaining what is work-appropriate, or a more complex difficulty to cope with the sensory stimuli of tight-fitting clothing. “Lots of autistic women would not be able to keep up with extreme beauty standards because of sensory issues, such as extreme sensitivities to tactile stimuli,” Sommer explains. “Some people only feel comfortable wearing loose clothing, which is a challenge if you work in a corporate environment.”

It’s just one of the many complexities that women with autism must deal with in the workplace. For now, Auticon is focusing on getting more autistic people into jobs, but the eventual hope is that such an initiative will not need to exist at all. “There’s a lack of willingness to accept different minds and cognitive styles and our entire society is kind of built for extrovert people,” Sommers says. “Most of the autistic women I’ve met have incredible coping structures that they come up with them themselves, but we should work towards the point where that’s not necessary.”

One thought on “‘It’s Exhausting’: The Hidden Struggle of Working Women with Autism”