Gyms that promote exhausting workouts have a new pitch for members: not moving a muscle.

Fitness centers increasingly are offering classes that feature meditation. Organizers say they’re responding to the demands of stressed-out members seeking introspection and relaxation in a place they already frequent.

Antigravity Cocooning, a class launched in January at a Crunch Gym location in New York, puts members in sling-style hammocks that hang from the ceiling.

The class consists of about 20 minutes of stretches and brief abdominal exercises, followed by 15 minutes of guided relaxation, with participants stretched out in the hammocks, their arms crossed like mummies. Soft music and dimmed, colored lighting enhance the effect.

“When I’m in the cocoon and I’m lying down like that, I’m here for me,” says Constantine Theodoratos, a Crunch member who usually lifts weights or does cardio at the gym but has taken a few of the antigravity classes. “I just feel calm.”

People become so relaxed that a few have fallen asleep in the class, says Donna Cyrus,Crunch’s senior vice president for programming. It soon will expand beyond Crunch’s West 19th Street location to more than 10 locations in New York, Miami, San Francisco and Los Angeles.

The class works where previous attempts at meditation-centered classes at Crunch fizzled, Ms. Cyrus says, largely because of the hammocks. They are surging in popularity indoors and out.

For about a year, the YMCA of Greater New York has offered half-hour meditation classes at its Upper West Side Manhattan location. Locations in Queens and Brooklyn also offer the class. 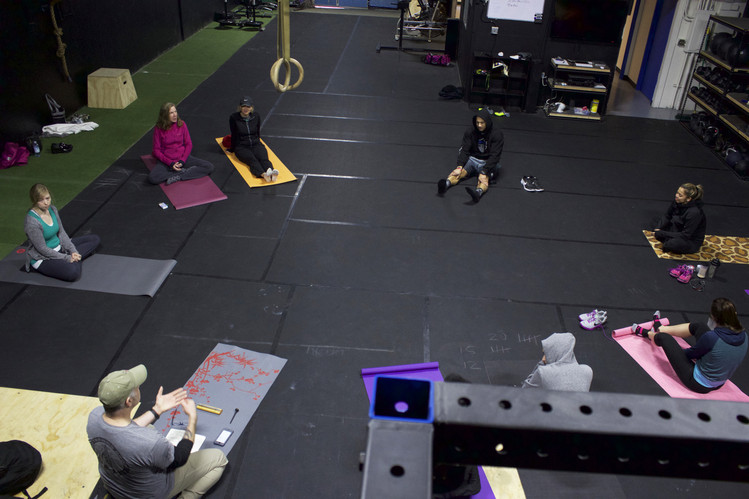 In April, luxury gym chain Equinox launches HeadStrong, a conditioning class that invites members to “start training our brains the way we train our hearts, lungs and muscles.” The fourth and final portion of the 60-minute class is called reboot. It includes targeted breathing techniques done lying down, according to Michael Gervais, one of the class creators.

StrengthFarm, a Portland, Ore., gym that offers CrossFit and sports-training workouts, has twice-monthly 90-minute mindfulness sessions in its industrial-style space. They are led by Richard Goerling, a Hillsboro, Ore., police lieutenant who completed a year-long facilitator training at UCLA’s Mindful Awareness Research Center.

Mr. Goerling says the goal of the class is “teaching awareness and self-compassion as two basic tools to help people perform better in their quest for physical fitness.” Common thoughts that surface while people exercise—that they are fat or weak, for instance—can hurt progress, he says. 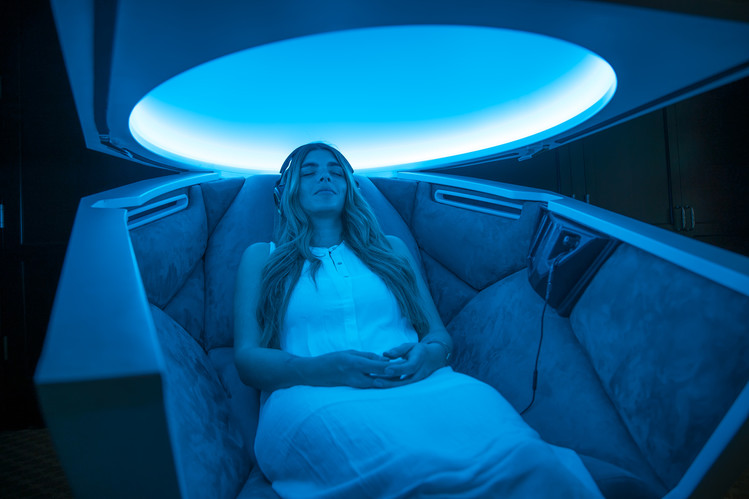 Somadome, a New York-based company, is in talks to place some of its meditation pods at fitness centers, founder and CEO Sarah Attia says.

Meditation isn’t right for every gym. An Anytime Fitness location in Scottsdale, Ariz., used to offer one-on-one guided meditation sessions in a soundproof room for $20. After about eight months, the gym dropped the option due to lack of demand. Most of the gym’s members like to get in their workouts and go, manager Melissa Hevner says.

But many see meditation as a part of gyms’ future. The 24 Hour Fitness chain is talking to a company called Somadome that makes pods that use sound and light to help people meditate. They consist of a seat with a small dome that covers the head and upper legs, leaving the lower legs exposed but giving the person inside a feeling of privacy.

Frank Napolitano, 24 Hour Fitness president, has talked to Somadome about placing units at some of its gyms. He’s intrigued by devices that aid meditation, because gyms often have tight space and plenty of noise.

“I can meditate in a subway car,” he says. “So I think some people can [meditate anywhere], with a lot of practice. But the majority of people can’t.”