Scientists believe they may have found the answer to combat a deadly pig virus which costs the pork industry billions of dollars a year. They say by using gene editing, they have made pigs resistant to Porcine Reproductive and Respiratory Syndrome Virus (PRRSv).

The virus, otherwise known as blue-ear disease, causes about $2 billion of losses annually in the EU and US. It had been baffling scientists who were unable to find a cure. However a British animal genetics firm, Genus, working alongside researchers from the University of Missouri, say they have quite literally cracked the code. 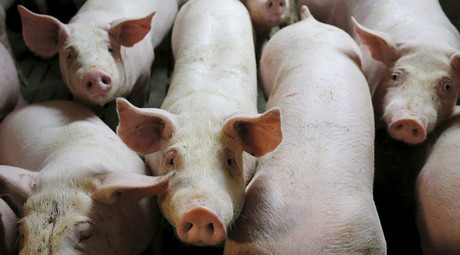 Publishing their findings in the journal Nature Biotechnology, they found that by denying the pigs a specific protein, which the virus uses to spread within the animals, they proved to be resistant to the disease.

Specifically for the test, the scientists bred three pigs without the protein. They found that the swine did not lose any weight and did not get sick, which are common traits with PRRSv.

“The demonstration of genetic resistance to the PRRS virus by gene editing is a potential game-changer for the pork industry,” Genus Chief Scientific Officer Jonathan Lightner said on the company’s website.

He added that the company faces several challenges to try and“develop and commercialize this technology,” however, he mentioned that “the promise is clear,” and that Genus will look to develop the technology for the well-being of animals, farmers and consumers.

While the findings could prove incredibly useful to the animal world and for agricultural uses, there are concerns the technology could be used on humans to create ‘designer babies.’

The technology allows scientists to edit genes by using biological ‘scissors’ that operate a bit like a word-processing program that can find and replace selected stretches of DNA.

In December, US scientists and activists called for a global prohibition on the genetic modification of human embryos, saying “there is no justification for, and many arguments against” the looming technology.

Such developments “could irrevocably alter the nature of the human species and society,” they said before last week’s International Summit on Human Gene Editing in Washington, DC.

“Gene editing may hold some promise for somatic gene therapy (aimed at treating impaired tissues in a fully formed person),”an open letter signed by numerous scientists read. “However, there is no medical justification for modifying human embryos or gametes in an effort to alter the genes of a future child.”

In May, the White House banned geneline editing, pending more research into the practice. In September, a group of researchers in the UK issued a plea for a wide-ranging ethical debate on the potential pros and cons of such genome editing.

(Phys.org)—An international team of researchers has identified the gene in petunia plants that is responsible for controlling how much UV light the flowers of the plant absorb which in turn has an impact on the types of pollinators that are attracted. In their paper published in the journal Nature Genetics, the team describes their genetic study of the plant and why they believe that what they found might help explain how it is that petunias adapt to attract different pollinators.

Petunias are flowering plants that rely on other creatures for pollination—over time, individual species have developed that rely on particular pollinators, but until now, the mechanism by which this has occurred had not been well understood. In this new effort, the researchers looked at the genetic makeup of three different species of petunias that attract bees (Petunia inflata), hawkmoths (Petunia axillaris) or hummingbirds (Petunia exserta).

In studying the three South American petunia species, they noted that the species that attracted hawkmoths absorbed the highest amount of UV light. This led them to narrowing down the genes of the three species until they came upon a single one—MYB-FL—testing showed that mutations to this gene caused the flower of the plant to absorb more or less UV light by causing fluctuations in the production of flavonol. The researchers believe the amount of UV light absorbed has an attraction quality for pollinators. From this they deduced that it was likely natural mutations occurred over time to the MYB-FL gene causing a different pollinator to become more attracted to a certain species—leading to the development of a new species.

More specifically, they found that it appeared that there was a shift in the long ago past, from bee attraction in one species to hawkmoth attraction, which led to another species developing and which was accompanied by a MYB-FL mutation, which caused an increase in the level of UV absorbing compounds in those flowers. Likewise, they noted there appeared to have been a different mutation that came about at a later time that caused a shift from attracting hawkmoths to attracting hummingbirds, once again leading to the development of a new species.

Abstract
Adaptations to new pollinators involve multiple floral traits, each requiring coordinated changes in multiple genes. Despite this genetic complexity, shifts in pollination syndromes have happened frequently during angiosperm evolution. Here we study the genetic basis of floral UV absorbance, a key trait for attracting nocturnal pollinators. In Petunia, mutations in a single gene, MYB-FL, explain two transitions in UV absorbance. A gain of UV absorbance in the transition from bee to moth pollination was determined by a cis-regulatory mutation, whereas a frameshift mutation caused subsequent loss of UV absorbance during the transition from moth to hummingbird pollination. The functional differences in MYB-FL provide insight into the process of speciation and clarify phylogenetic relationships between nascent species.

First announced back in 2013, with an upgraded prototype unveiled earlier this year, Terrafugia’s TF-X flying car is about as close as the world’s gotten to our collective dream of someday commuting via cloud alleys.

And now the Massachusetts-based aircraft company has hit its next big milestone – the US Federal Aviation Administration (FAA) has given it special permission to run in-air tests with an autonomous drone version of its flying car.

Now, before you get too excited, the model they’ll be testing in US airspace is not only unmanned – it’s a mere tenth of the size of their actual flying car prototype. But that’s not so bad, because having the flexibility to actually test a miniature version of the TF-X ‘in the field’ is expected to fast-track the R&D phase of their actual, real-life flying car.

Their scale model will be permitted to reach altitudes of 121 metres and speeds of 160km/h. It can use US air space throughout the country, but the team behind it must be in communication with the relevant authorities at all times.

According to Aero News Network, these tests will be crucial to the development of the actual TF-X flying car, due to the aircraft’s unique engineering. “Because of the unconventional configuration of the TF-X, it is vital to achieve sustained, stabilised hovering with smaller models before developing a full-size TF-X prototype,” they report.

The four-passenger hybrid vehicle will include rechargeable batteries that can be changed either by its engine or by electric car charging stations. It will be small enough to drive on regular roads and fit in regular garages, and the flying part will be computer operated, so you won’t have to be a pilot to drive one.

As we reported earlier in the year:

“When you want to go into flying mode, the wings will fold out, and twin electric motor pods on the ends will power up and lift the car off the ground using 1 megawatt of power. Two small helicopter-style propellers will provide thrust when needed, and are then folded back in when the car is cruising.”

Terrafugia says it’s looking at eight to 12 years of development for their flying car, but winning approval to get their scale model airborne is keeping them on track nicely. We’ll just have to wait and see what the next phase will be. Watch this space.