Is sugar making us sick?

A team of scientists at the University of California in San Francisco believes so, and they’re doing something about it. They launched an initiative to bring information on food and drink and added sugar to the public by reviewing more than 8,000 scientific papers that show a strong link between the consumption of added sugar and chronic diseases.

The common belief until now was that sugar just makes us fat, but it’s become clear through research that it’s making us sick. For example, there’s the rise in fatty-liver disease, the emergence of Type 2 diabetes as an epidemic in children and the dramatic increase in metabolic disorders.
Companies make healthful food options more readily available to workers
Mary MacVean
Laura Schmidt, a UCSF professor at the School of Medicine and the lead investigator on the project, SugarScience, said the idea is to make the findings comprehensible and clear to everyone. The results will be available to all on a website (SugarScience.org) and social media platforms like Facebook and Twitter.

Added sugars, Schmidt said, are sugars that don’t occur naturally in foods. They are found in 74 percent of all packaged foods, have 61 names and often are difficult to decipher on food labels. Although the U.S. Food and Drug Administration requires food companies to list ingredients on packaging, the suggested daily values of natural and added sugars can’t be found. 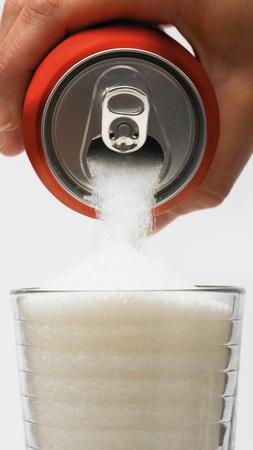 The FDA is considering a proposal to require food manufacturers to list information on sugars in the same way they do for fats, cholesterol, sodium, carbohydrates and protein. But because so much added sugar is dumped into so many products, one average American breakfast of cereal would likely exceed a reasonable daily limit.

“SugarScience shows that a calorie is not a calorie but rather that the source of a calorie determines how it’s metabolized,” said pediatric endocrinologist Robert Lustig, a member of the SugarScience team and the author of “Fat Chance: Beating the Odds Against Sugar, Processed Food, Obesity, and Disease.” Lustig said that more than half of the U.S. population is sick with metabolic syndrome, a group of risk factors for chronic diseases such as heart disease, diabetes and liver disease that are directly related to the excessive consumption of added sugars in the Western diet.

Figures from the Centers for Disease Control and Prevention show the category of heart attack/stroke as the leading cause of death in the United States. Every day, 2,200 Americans die of cardiovascular disease. That’s about 800,000 a year, or one in three deaths.

The latest statistics from the American Diabetes Association show that 29.1 million Americans, or 9.3 percent, have diabetes. Of that number, 21 million have been diagnosed and 8.1 million have not, and the numbers continue to grow, according to the association.

cComments
We’ve been told by the “experts” that animal fat is bad – a known killer. It wasn’t until the Atkins no carb diet became widespread enough that the medical community had to admit that the evidence didn’t support the claim. To thei utter astonishment, high saturated…
OLDERWISER
AT 1:59 AM DECEMBER 07, 2014
ADD A COMMENTSEE ALL COMMENTS
1

It doesn’t stop there. The American Liver Foundation says at least 30 million Americans, or 1 in 10, has one of 100 kinds of liver disease.

Clinicians widely believe that obesity is the cause of metabolic disease. Although it is a marker for these diseases, Lustig said, it’s not the cause. “Too much sugar causes chronic metabolic disease in both fat and thin people,” he said, “and instead of focusing on obesity as the problem, we should be focusing on our processed-food supply.”

The average American consumes 19.5 teaspoons (78 grams) of sugar a day, substantially more than the amount recommended by the American Heart Association. The association sets these limits: 6 teaspoons (24 grams) for women, 9 teaspoons (36 grams) for men, and 3-6 teaspoons (12-24 grams) for children, depending on age. Just one 12-ounce soda contains 8 to 9 teaspoons (32-36 grams) of sugar.
Liquid sugar in sodas, energy drinks and sports drinks is the leading source of added sugar in the American diet. That represents 36 percent of all added sugars consumed, according to the Department of Health and Human Services. And because liquid does not include fiber, the body processes it quickly. That causes more sugar to be sent to the pancreas and liver than either can process properly, and the resulting buildup of sugar leads to heart disease, diabetes and liver disease.

Consuming too much sugar causes the level of glucose sugar in the bloodstream to increase. That, in turn, causes the pancreas to release high levels of insulin that cause the body to store extra calories as fat.

Too much insulin also affects the hormone leptin, a natural appetite suppressant that signals the brain to stop eating when full. But the imbalance of insulin levels caused by the intake of too much sugar causes lipid resistance, and the brain no longer gets that signal.

Another member of the SugarScience team, Dean Schillinger, is a professor of medicine at UCSF and a practicing primary care doctor at San Francisco General Hospital. He believes the overconsumption of added sugars is a social problem, not a problem of individual choice and freedom.

“People are becoming literate about the toxic effects of sugar,” Schillinger said, “and have more understanding of the idea that high doses are bad for one’s health.” He sees evidence that those in a higher socioeconomic bracket are taking steps to limit intake of sugar when compared with poorer, less literate people.

Healthy food is expensive and less readily accessible in poorer neighborhoods, and because corn is so abundant and cheap, it is added to many food products. “Dumping high fructose corn syrup into cheap foods, sodas, sports drinks and energy drinks is toxic to the body, causing epidemic metabolic diseases and a serious health crisis,” Schillinger said.

To underscore the scope of the problem, he pointed out that during the Iraq and Afghanistan wars, 1,500 American soldiers lost a limb in combat. In that same period, 1.5 million people in the U.S. lost limbs to amputations from Type 2 diabetes, a preventable disease. “We have yet to mobilize for a public health war,” he said, “but the time has come to do so.”

Such a war would have to take on the root causes of the problem. As a nation, Schillinger added, we would need to look at our food policies, food pricing, availability of healthy foods, and the marketing being carried out by food and beverage industries to hook the public on unhealthy choices loaded with added sugar.

Frank Hu, a professor of nutrition and epidemiology at the Harvard School of Public Health, is not a SugarScience researcher, but he agreed that the amount of sugar consumed by the American public is too high. SugarScience, he said, is being helpful by bringing the information about added sugar to public attention.

“It’s just about impossible,” Hu said, “to know from food labels what kinds and amounts of sugars are in a product.” That’s why he thinks the FDA should require food companies to list those amounts on all food labels so people know what they’re eating, in what amounts they’re eating it, and what amounts are safe.
Food labels are important, Schillinger said, and they need to be revised, but the most important change needed is to make the healthier choice the easier choice.